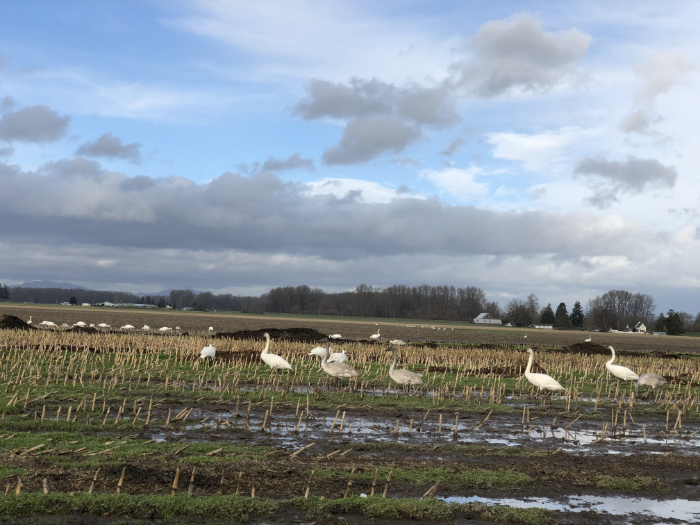 A drive to Fir Island took us past field after muddy field full of trumpeter swans. The cygnets are as large as their parents now, with some starting to show white feathers. They do love digging around in the mud. We saw a cygnet with its face coated in mud, which made me wonder how a swan washes its face. Does it stick it in water and give it a good shake? Take to the air and hope the wind blows the mud off its face? 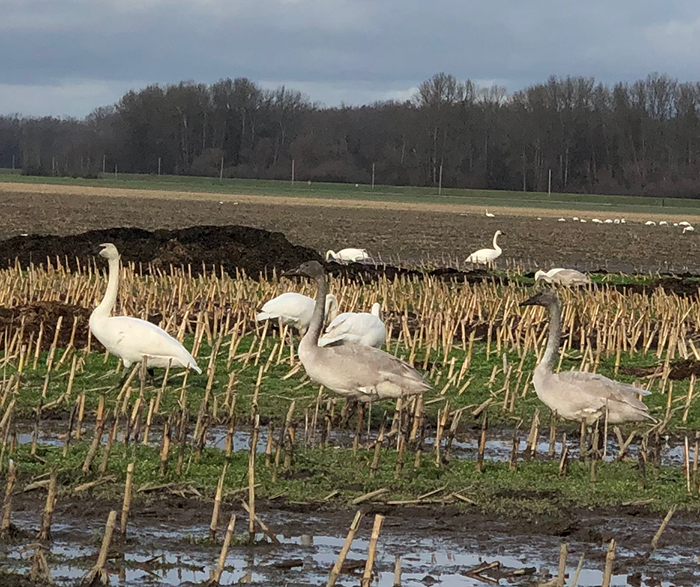 These are big birds, the largest water fowl alive today. Chatty too. You can close your eyes and hear them talking to each other. As they walk, they say something every few steps, soft, soothing honks.

It’s hard to believe now, but around 1933, fewer than 70 were known to exist. They had been hunted nearly to extinction. How much poorer we would be if this species had gone extinct. I certainly wouldn’t be enjoying winters with thousands of them spending the season in this valley. How a trumpeter swan washes its face is something that wouldn’t cross my mind.

Which shows the depravity of economics. If it doesn’t involve the exchange of money, things have no value to an economist. GDP, the thing economists and politicians worship places no value on trumpeter swans, no value on unpaid work, no value on most of the things that make life on this planet worth living. I listened to a fascinating talk today, “The Unpaid Work that GDP Ignores and Why It Matters” by economist Marilyn Waring on the subject. We need a political and economic system that values what makes life worth living.

Nicola Sturgeon also gave a though provoking speech along these lines, “Why Governments Should Prioritize Well Being”. 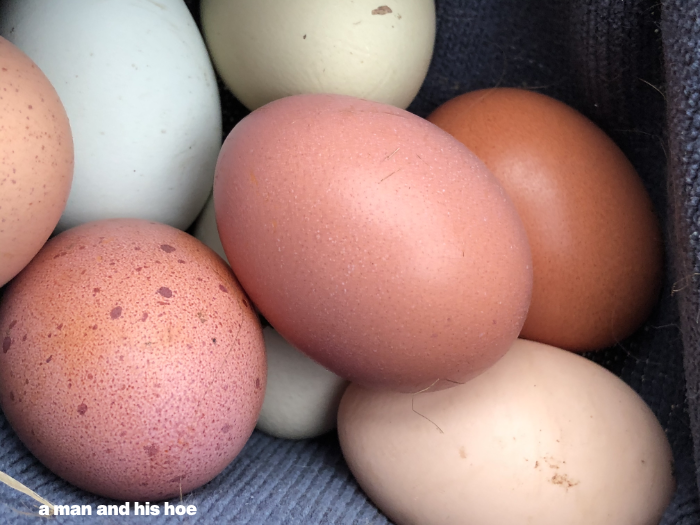 I was gathering eggs at the right time this morning to discover who is laying the rose colored egg. And here she is below. She came squawking out of a nest just as I was about to reach inside, and there was a very warm rose egg next to a cool egg.

She’s very distinctive with her orange feathers around her neck, a blunt beak, and five pointy crests for a comb. I’ll call her Rose. 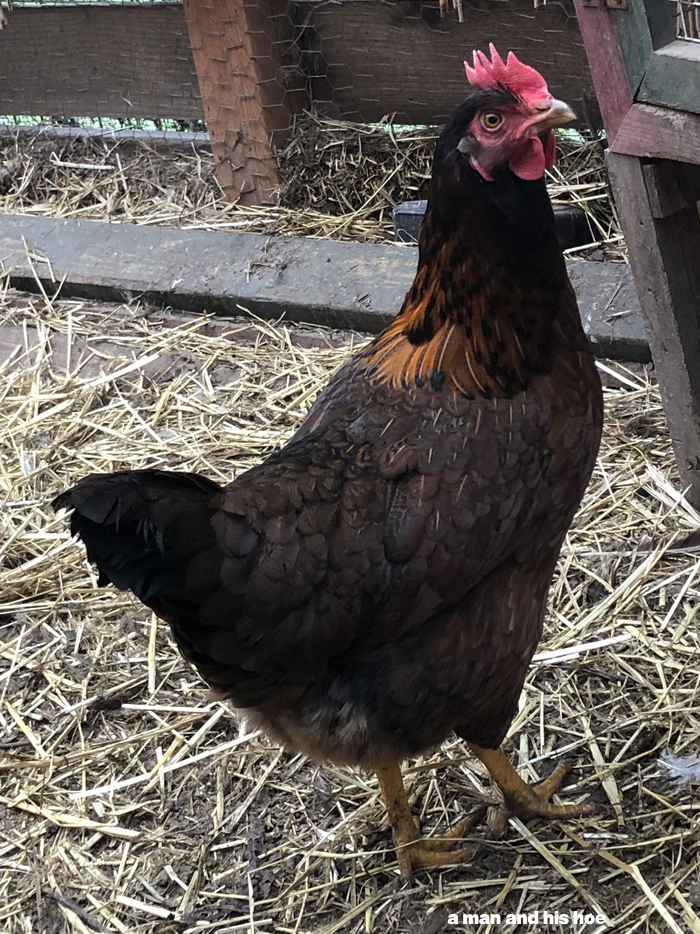 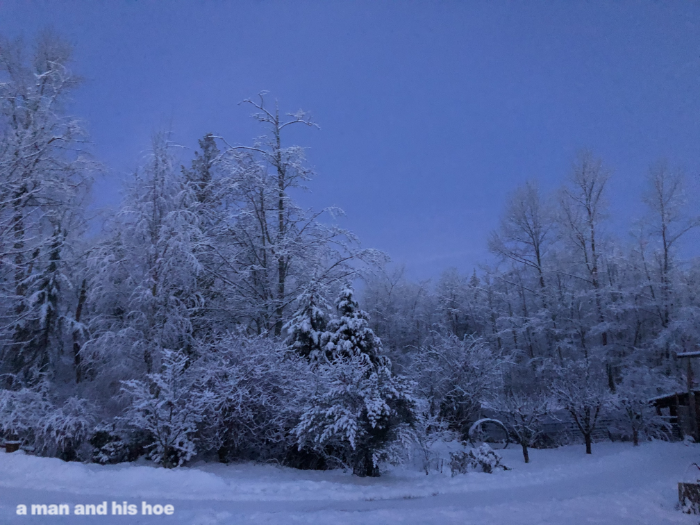 Yesterday morning was magical. Enough snow had melted that I could make my Thursday deliveries of bread, eggs, and tofu on Friday. Wednesday I decided that there was no way I was going to venture out with all the snow on the roads.

Thursday night, a fresh inch of snow fell, not enough to be alarming, but enough to make for a dazzling morning. 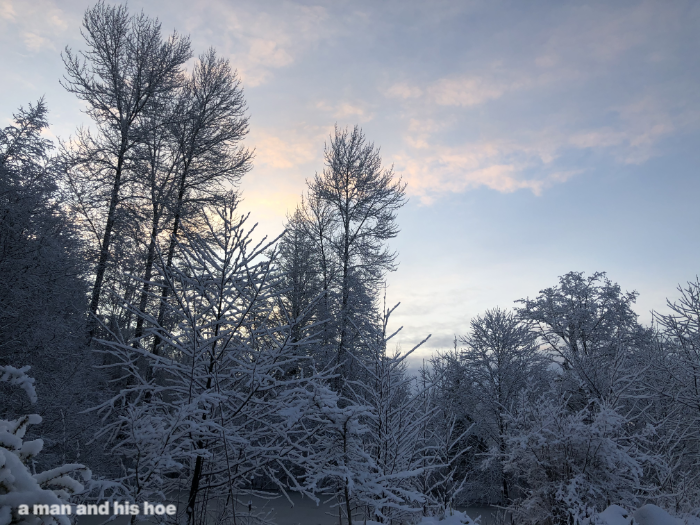 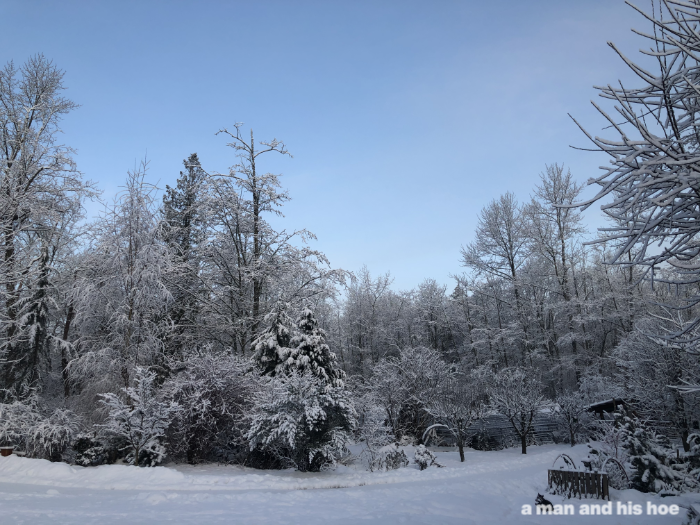 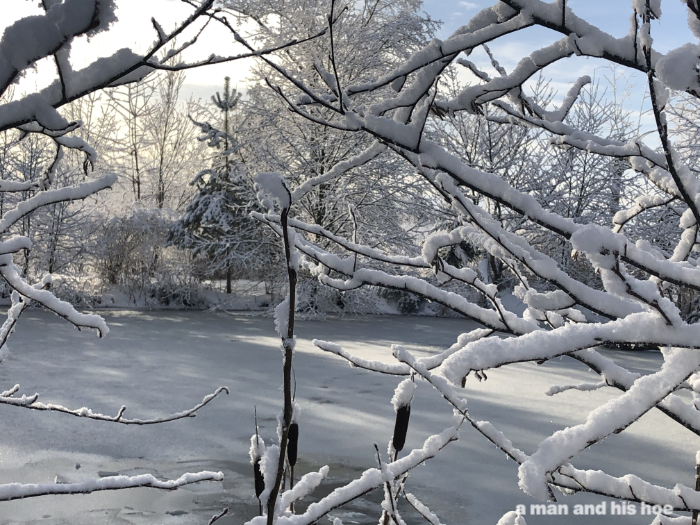 This morning, yesterday’s beauty is melting away, drip by drip by drip. The snow is sliding off the roofs, turning into big puddles in the woods, and making paths muddy walkways. 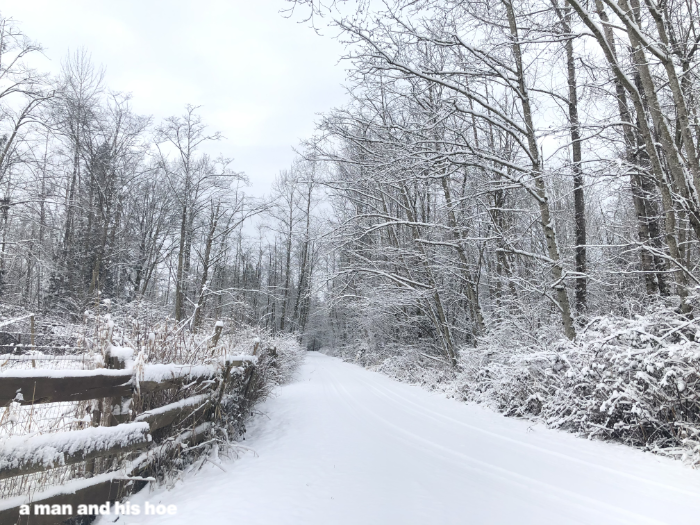 Yesterday morning it started with a light snow. By dark the temperature dropped below freezing. During the night the fluffiest of snow fell, blanketing everything. Snows here are often wet and heavy. Today’s snow is so light walking through it is like walking on clouds. Shoveling the driveway after the snow stopped falling was a breeze. With some of our heavy snows, each scoop weighs a ton. Today’s snow was lighter than marshmallows.

The forecast is for one more day of snow before our winter rains return on Thursday. By Friday this wonderland will just be a memory. 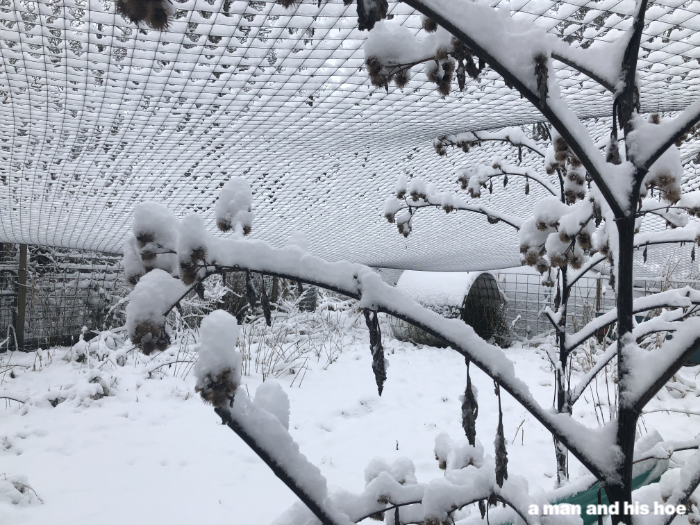 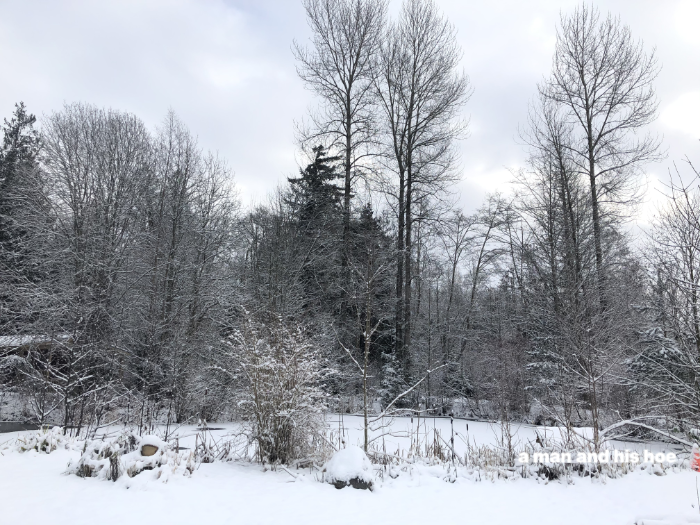 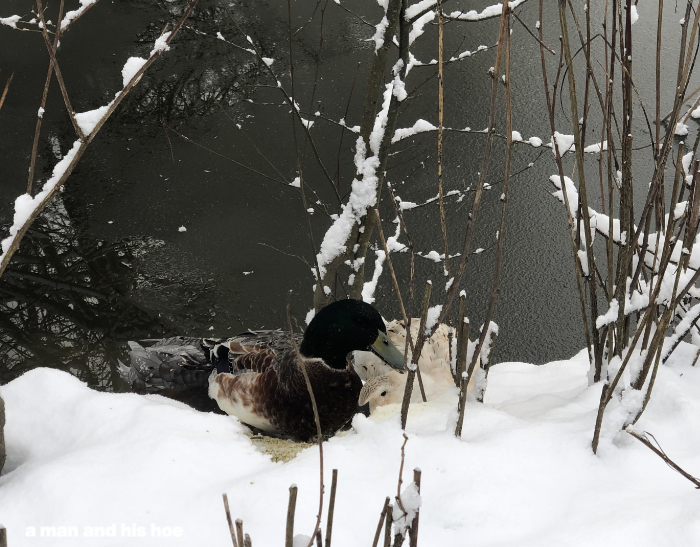 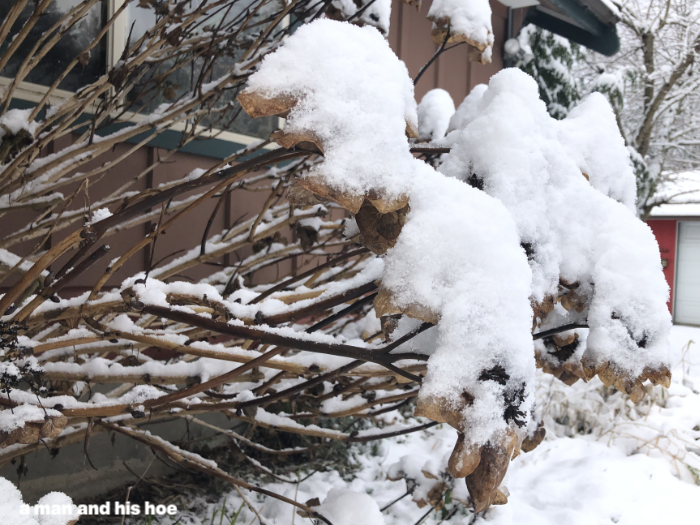 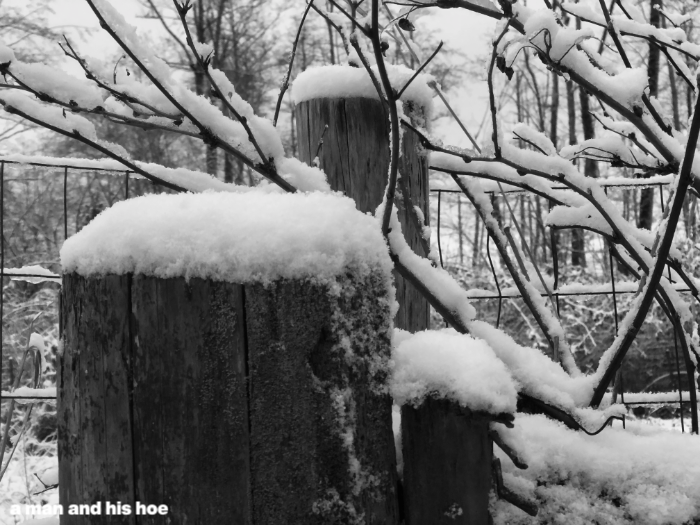 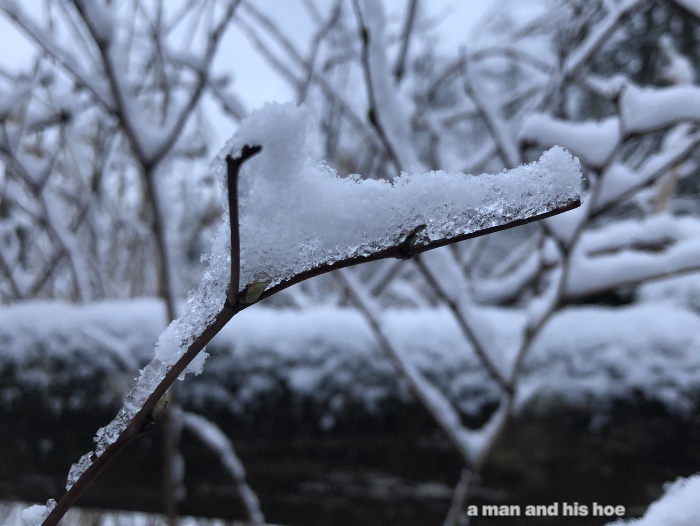 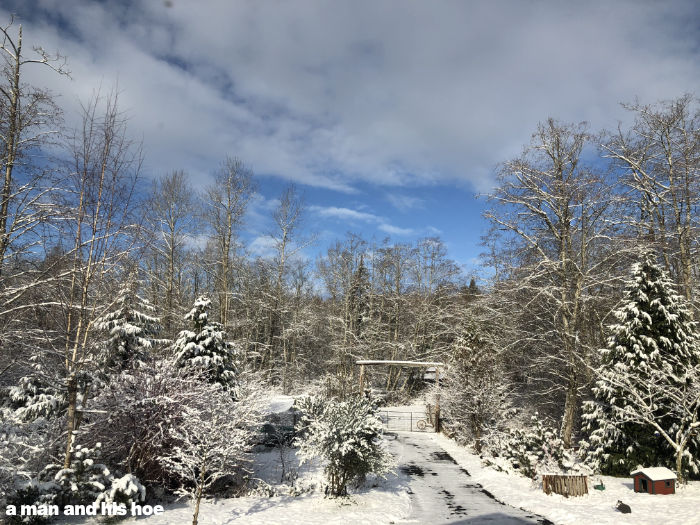 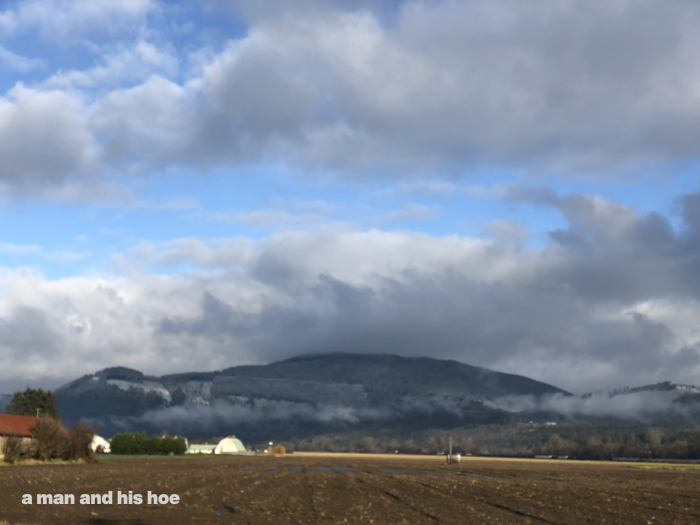 Light snows during the night and on the surrounding hills were of concern when the forecast was calling for bitter cold starting Sunday night. Since mid week some forecasts called for morning lows down to 5ºF/-15ºC this coming Tuesday and Wednesday. What a relief to check the forecast a short time ago and see the coldest forecast call for a low of 20ºF/-7ºC on Monday. 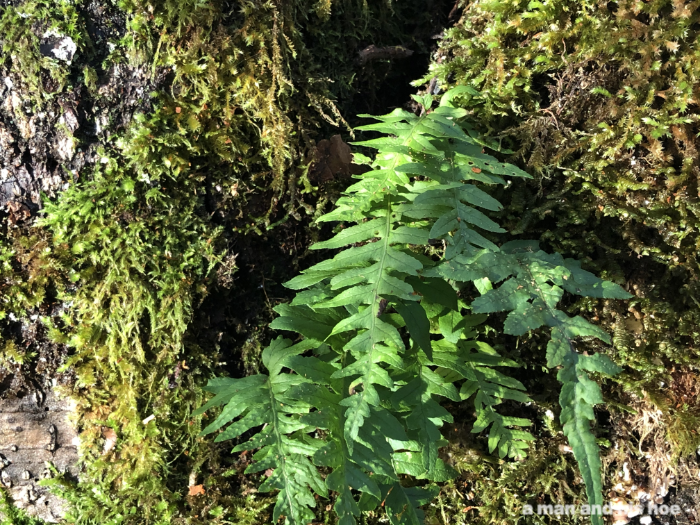 In the woods a baby fern has found a lovely home in a dying tree. Trees die as slowly as they grow. Over the years they weaken, their branches fall, and all sort of things thrive on their dying frame. They become so covered with living things, mosses, ferns, mushrooms, that in a way they live on for years after they are dead. 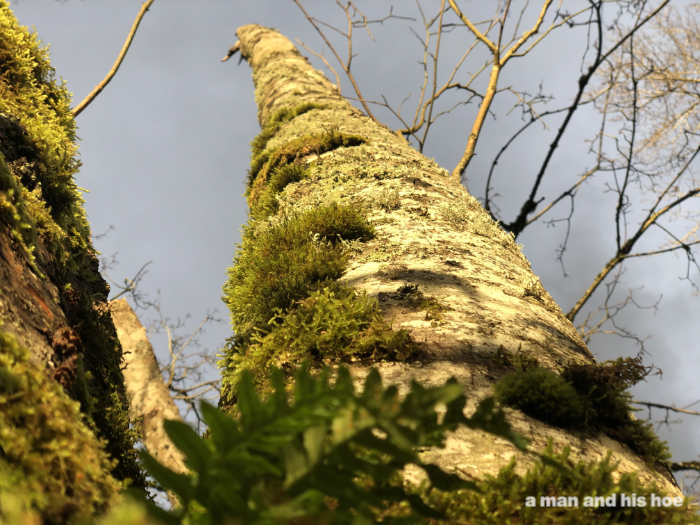 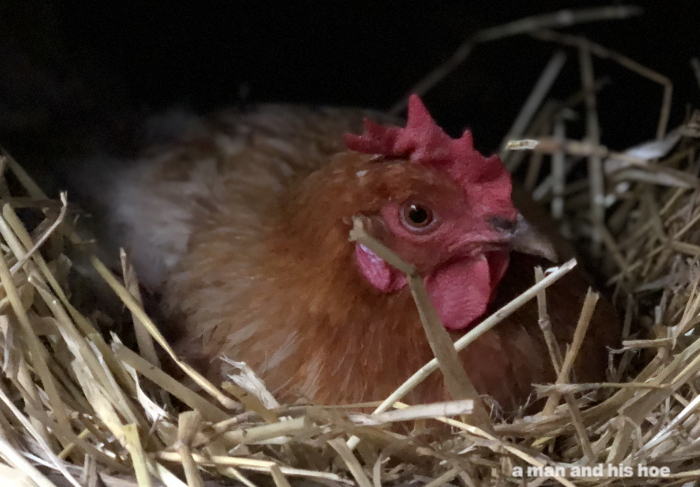 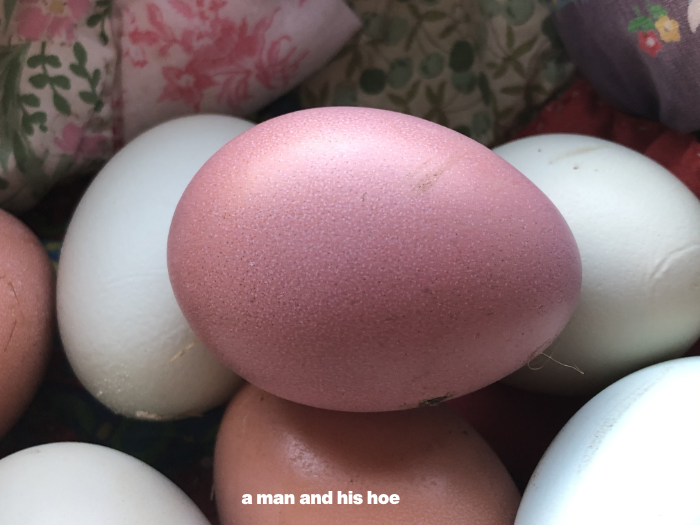 The new year starts with a mystery. One of the hens is laying a rose colored egg, but which one? This is when it would come in handy to be able to talk with them and ask, “Which one of you is doing this?” 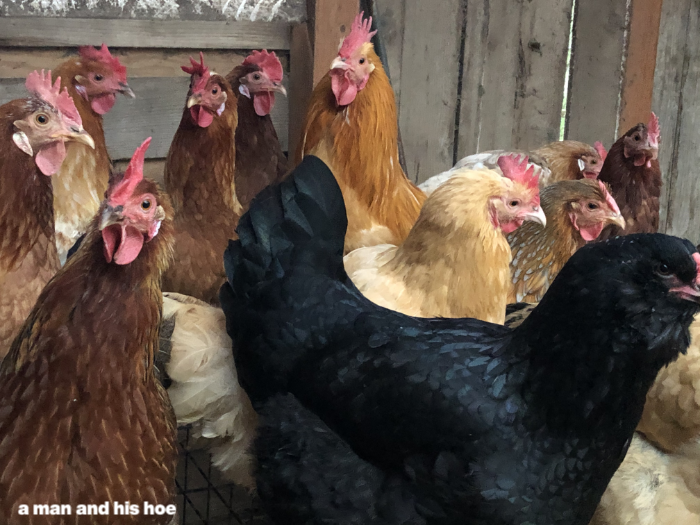 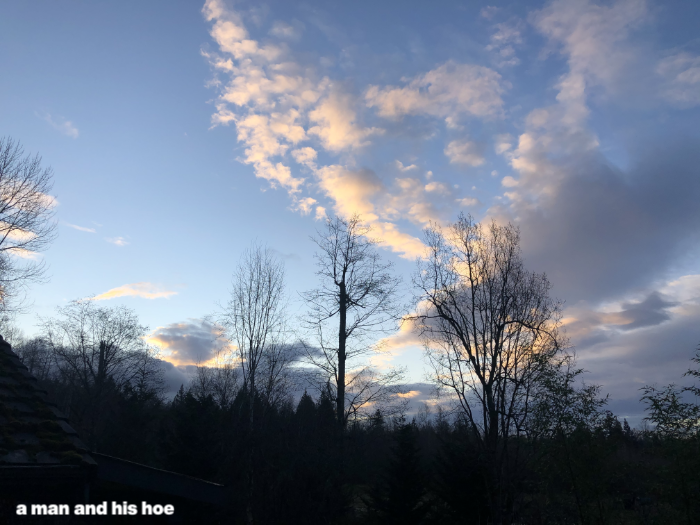 What a morning to start a new year. New Year’s morning broke calm and mild, so mild I spent time outdoors on the deck enjoying the rising sun. Not only was it mild, English Daisies and Forsythia were in bloom.

2020 is the year of the rat, the first of the animals in the 12 cycle of zodiac animals. The rat beat all the other animals in the race to decide the order of the zodiac. Cleverly, he hitched a ride on the ox and just before the ox was about to step over the finish line, the rat jumped off in front of the ox and became the winner of the race. 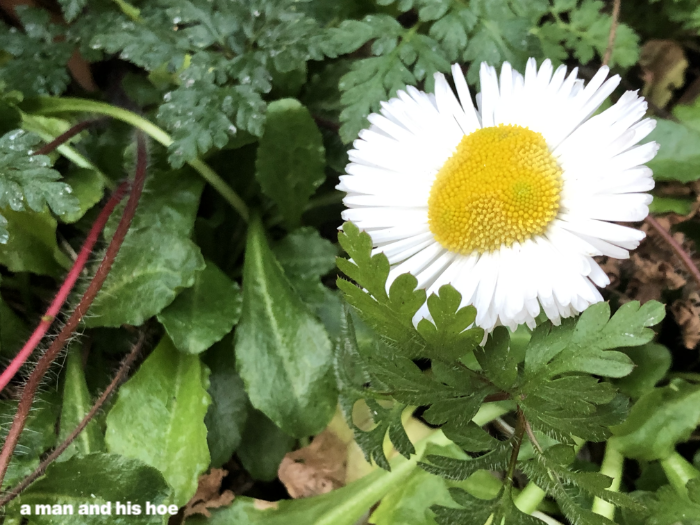 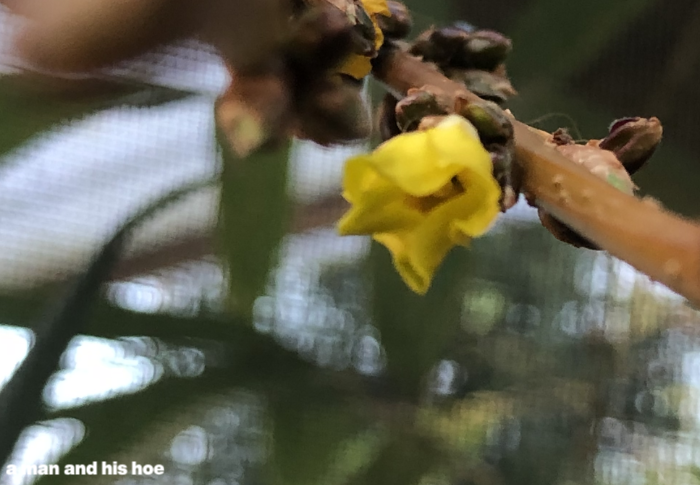 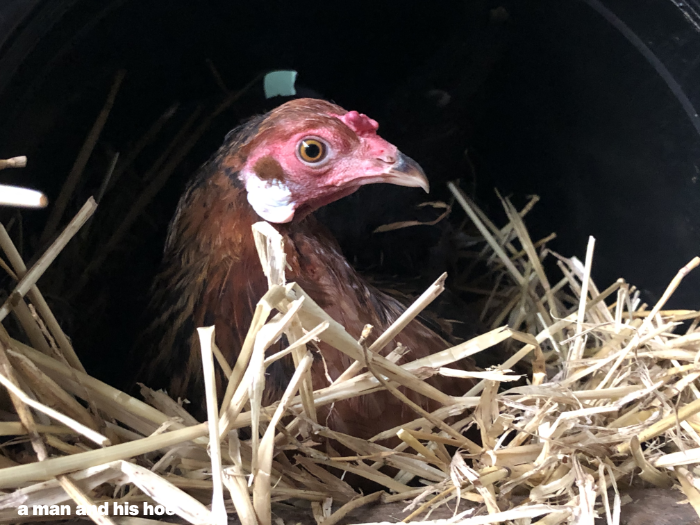