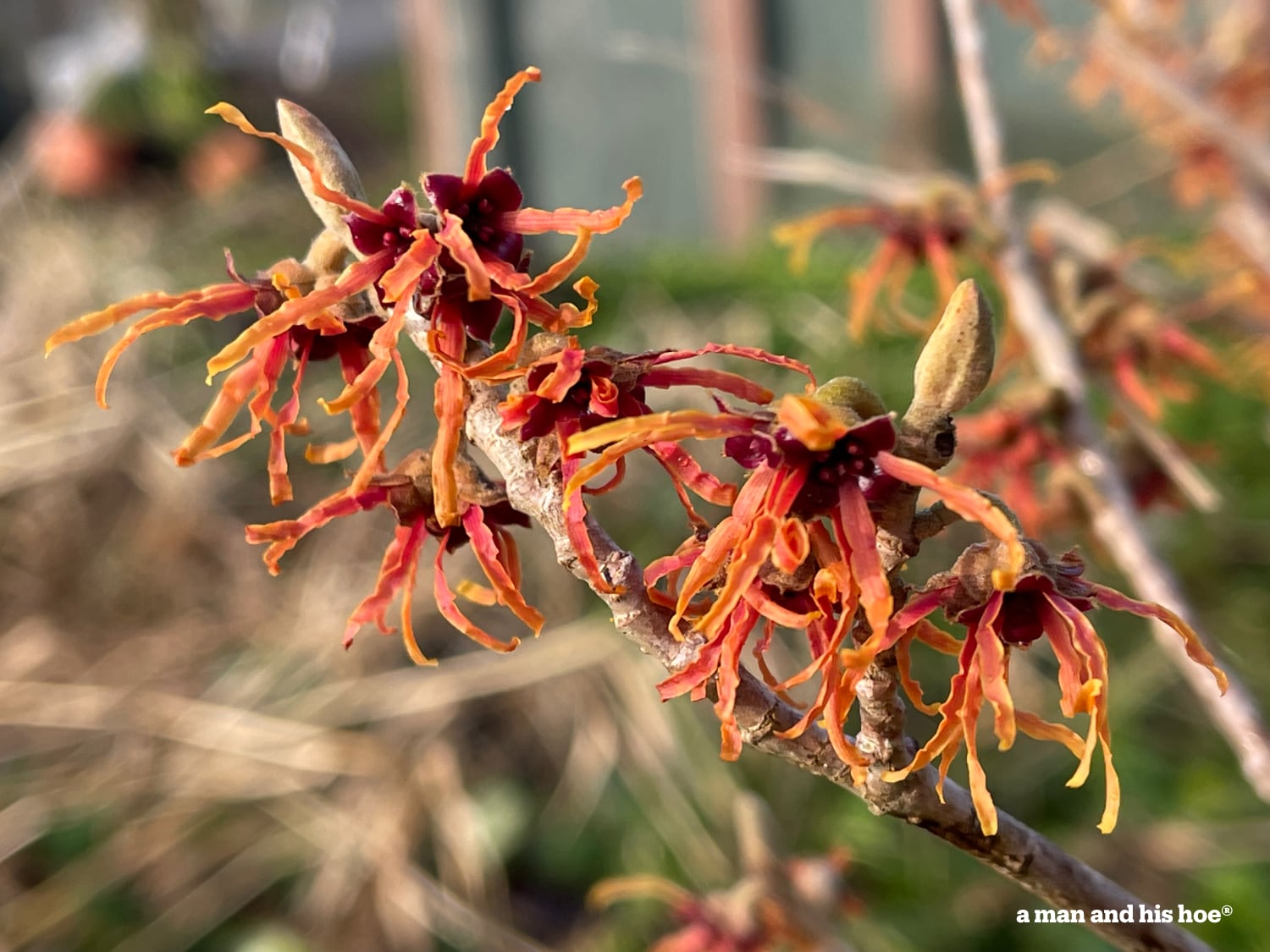 The witch hazel is blooming. One of the first flowers of the season to spread its petals. Its spicy fragrance takes me to distant spice bazaars. So what pollinates these delicate flowers at the end of winter? The bees and wasps are still fast asleep. Whatever it is, it is an insect that braves the cold. Though with such an enticing fragrance, if I was a bug, I’d stir out of my winter hibernation to fly into the petals. It is a fragrance worth dying for.

The sweet daphne didn’t fare as well as the witch-hazel. Much of the plant is frost bitten. However it is far from dead. Underneath the sad, leaves, shoots are sprouting. An early bloomer, come mid to late February, its heady scent will fill the air.

The heavy snow this winter was too much for the bamboo too. Many lay flat on the ground. Some stems snapped. I won’t need to cut any bamboo for poles this year. I’ll get plenty of bamboo poles just cleaning up all the fallen ones.

The chickens are ready for spring. The more bugs the better. Pickings are slim this time of year. But once it warms up, the ground will be swarming with scurrying things to nab.

There was sunlight at dawn today instead of thick fog. For a change, the sun’s rays pierced through the thick morning fog this morning. And in no time the clouds went from gray to blue. On a morning like this, it’s easy to imagine spring just around the corner.

The sun’s rays at dawn made the frosty grass sparkle.

The cherry blossom buds are still tiny and hard. But all the sunlight on a day like today will make them grow.

The alder trees are already getting their reddish hue from their swelling buds. A few more weeks and they will be in bloom, though their plain, hanging flowers won’t attract throngs of flower viewer like the cherry trees. And their pollen dust will make many people’s eyes water and noses twitch and sneeze.

The skies which stayed blue all day during the height of the pandemic are a thing of the past. A jet flying in from Asia this morning left it’s mark on the clear blue sky. And an hour later, the contrail had spread across much of the sky.

Hopefully these jet contrails will be a thing of the past some day. Electric jets will take to the skies and future generations will never know blue skies that turn cloudy from all the jets flying overhead.

The swans sure love the bright sunlight. Everywhere I looked on my drive to deliver eggs and tofu, there were swans. I stopped and counted 136 swans in this field. In nearby fields, flocks of swans just as large basked in the morning sunshine.

After the rains, the chickens are out scratching through the dry ferns by the pond. More than a month after the winter solstice, the sun is much stronger. Though not strong enough to burn away the fog bank that floats above us day after day.

After the rains, it’s easy to miss the chickens when they are out in the woods. They blend in well. It’s the soft, rustling sound they make as they scratch through the dried leaves that tells you where they are.

But they are wary. So a predator has to be very, very quiet to get one. Luckily for me, it’s been a while since I’ve lost one. What am I saying? Luckily for me? No, luckily for the chickens. We humans have a tendency to make everything about us.

After the rains, the winds, the heavy snows, fallen trees and branches litter the forest floor. The chickens came through the winter unscathed. The trees not. Many toppled over. Others lost limbs and branches. They block paths. Cover bridges. The effects of this winter will linger long into spring and summer. But that’s nature. Chaos. Bedlam. Death and renewal.

From a distance, wild areas look so calm and peaceful. Sit at a viewpoint and look out over the valley, mountains, sea, and islands. It’s all so harmonious and beautiful. But look closely and nature is a mess. With no one to clean it all up!

The closer you look, the more ghastly nature becomes. Under a microscope, each drop of water is a constant war zone. Bacteria gobbling up each other. Nematodes cannibalizing each other. Micro organisms armed to the teeth racing to eat before they are eaten. It’s the stuff of nightmares.

Still, after the rains, even though it’s foggy, it’s nice to dry out.

“Will they fly?” I was thinking that this morning when I looked out and saw the bright sunshine.

This morning started out very spring like. Is it still winter? Is it over? Will he have nothing but spring weather from here on out?

Lummi Island sure had a thick cloud cap this morning when I went on my delivery route. At many angles, the islands off the coast just look like mountains not far away.

A few days ago when I went out in the morning and counted the ducks, there were 9 ducks, not the expected 8. Swimming among the domesticated ducks was a Mallard.

He’s been with the flock of ducks ever since, swimming with them, and coming up onto the bank to feed too. We‘ve even caught him cavorting with the hens.

Which makes me wonder, if the hens hatch ducklings and he is their father, will the ducklings fly away when they grow up? He is smaller than the other ducks and since he flew in, I’m sure he can fly away easily. But what about the cross between him and the domestic ducks? What will they be like?