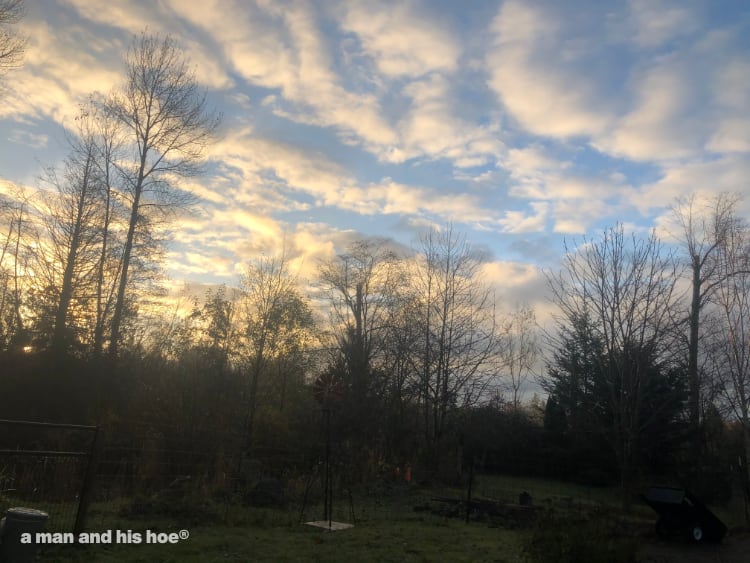 You can’t ask for a better morning this time of year. Barely cold, no rain coming down, and promises of sunshine on the morning clouds. 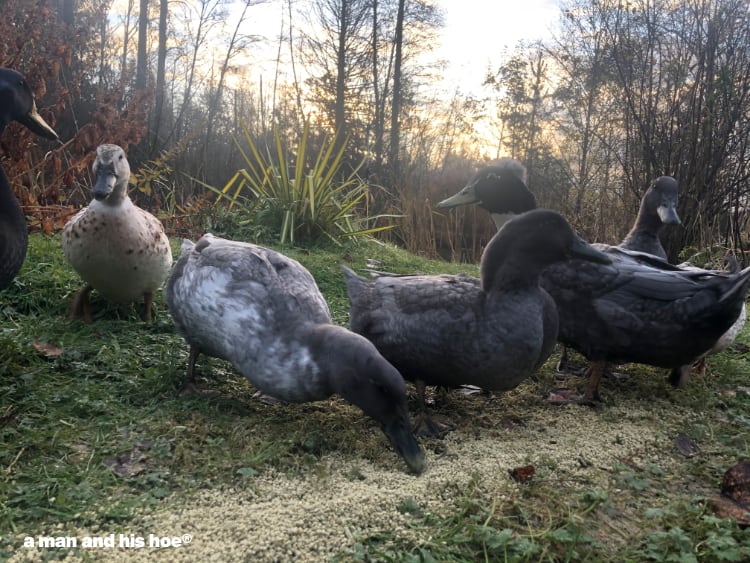 The ducks on the pond are happy this morning. The four young ones we moved to the pond have blended with Snow and the other two older ones. The more the merry, that seems to be duck philosophy. I guess if you are a duck, the more ducks you are with, the less chance you will be the one eaten. 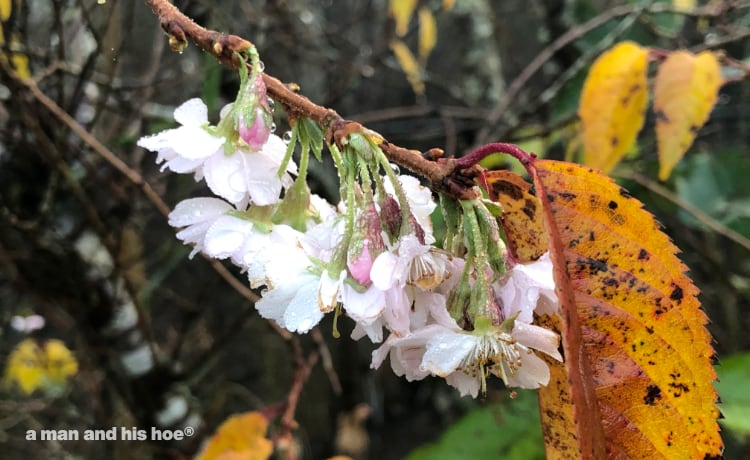 The cherry tree the blooms year round doesn’t disappoint this time of year. Blossoms and fall leaves on the same tree. That makes for quite a show. 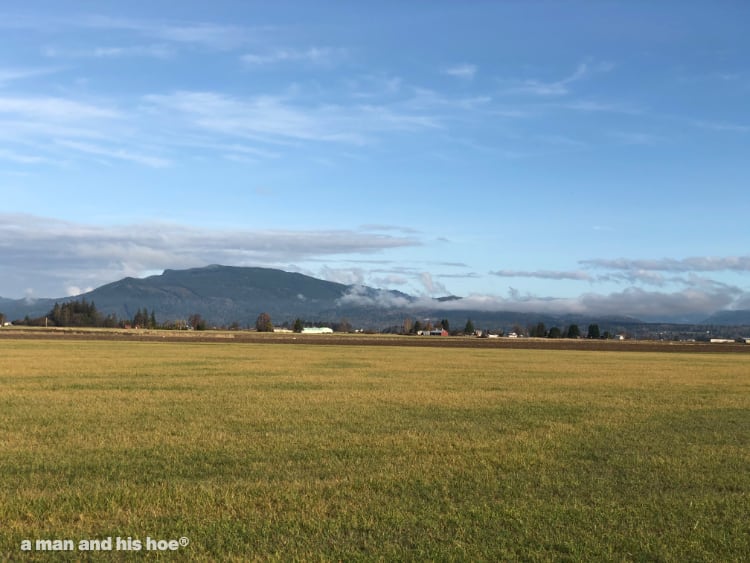 The Chuckanut Mountains and the other Cascade foothills are soothing today under a blue, November sky. If this was Japan, there would be small shrines on the top of many of the peaks. For mountains that comfort so many, on a summer day, the trails up the mountains are packed with hikers, shrines at the tops would be fitting. 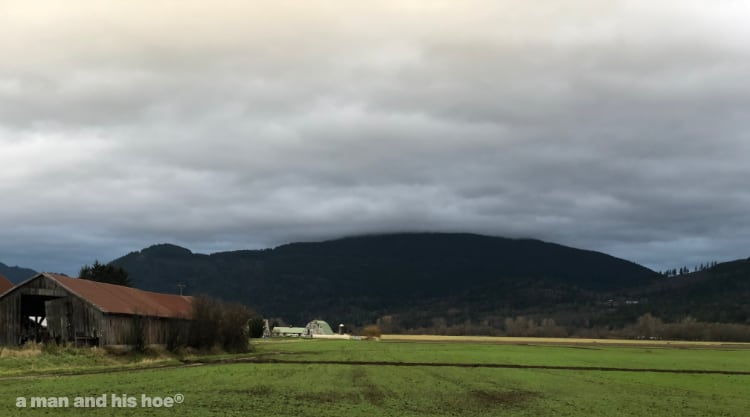 Chuckanut Mountain was particularly dark and broody today when I went down to the Post Office. On a day like today, it looks like it’s gone into hibernation. 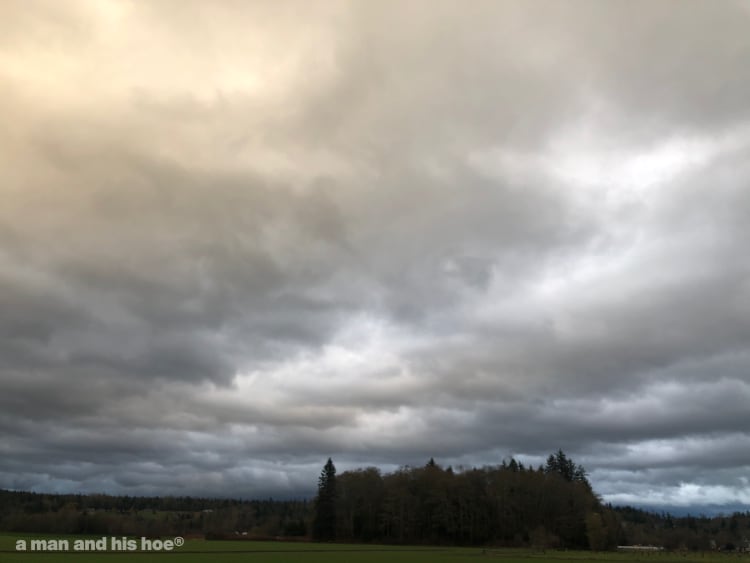 As thick as the clouds look today, it’s hard to imagine that on the other side of the clouds the sun is shining brilliantly and the sky is bright blue. Years ago, when I used to fly in and out of Seattle, it was always a surprise to take off under dark, sullen skies and pop into dazzling blue skies soon after take off. 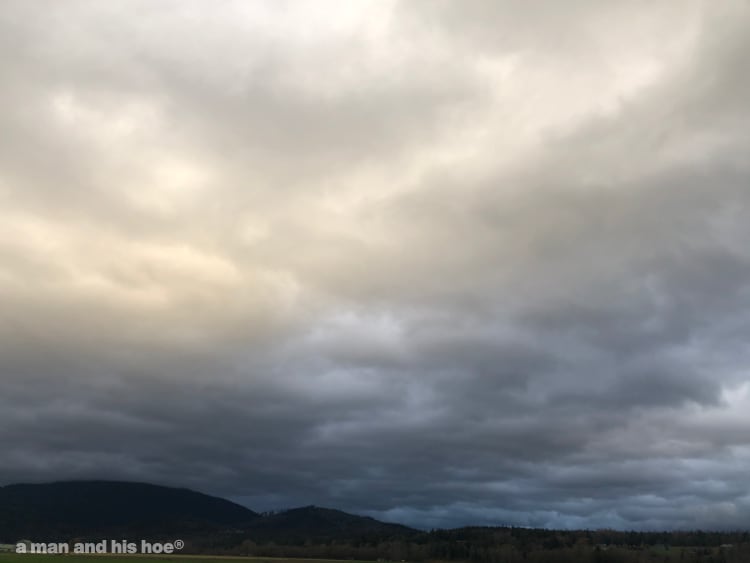 Do the birds that live here ever fly above the clouds just to bathe in bright sunshine? 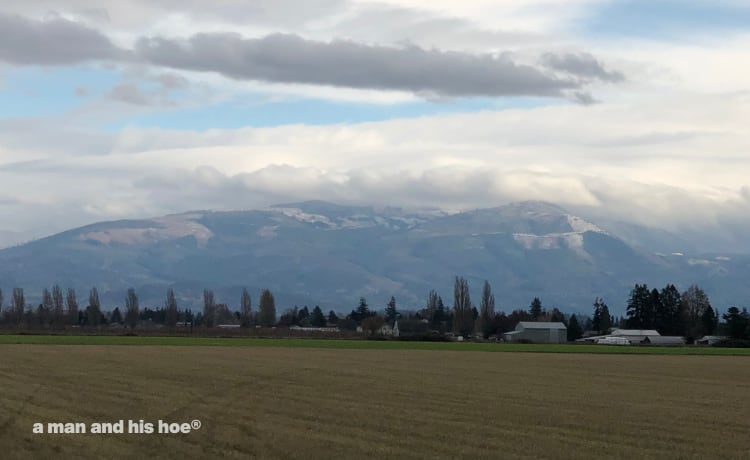 Winter has returned to the foothills. When the clouds lift, the upper half of the foothills are dusted with snow. White, gray, subtle shades of blues and dark greens, winter here is a palette of pastels. 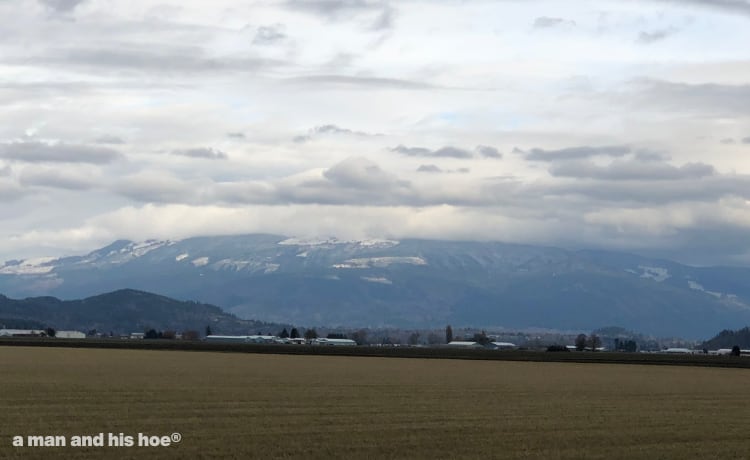 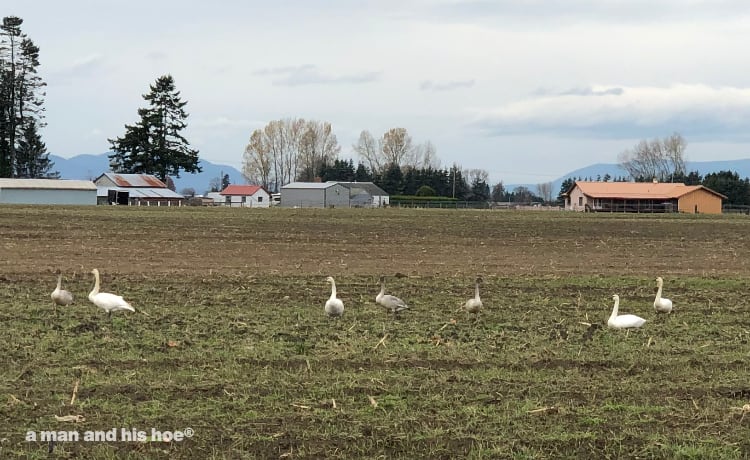 And where did the swan winter two hundred years ago when the valley was thick forest? On the large lakes? Along the rivers? And how has the change in diet affected them? What they forage in wheat, corn, and potato fields must be different than what they forage in lakes and rivers.

I would enjoy having the swans drop by to swim in our little pond, but it is too small. Swans are like jumbo jets. They need long runways to take off and land. I’ve seen large peahen blast straight up into the air with their powerful wings, but swans need a running start to take to the air. Watching them take flight is like watching jets lumbering to the end of a runway and leaving the earth just before they run out of runway.

A bobcat is paying us visits. We saw it walk up the lane between us and the neighbors during the afternoon a few weeks ago. This week a motion sensitive camera I set up in the woods caught it walking near the cabin where I make tofu on Thursday night and Friday evening. A blackberry vine got in the way of getting a clear picture of it, but if you look closely you can see it walking by.

It is unnerving and exciting to have such a magnificent cat strolling through the woods. But I am keeping the chickens inside their fenced yard for the time being. 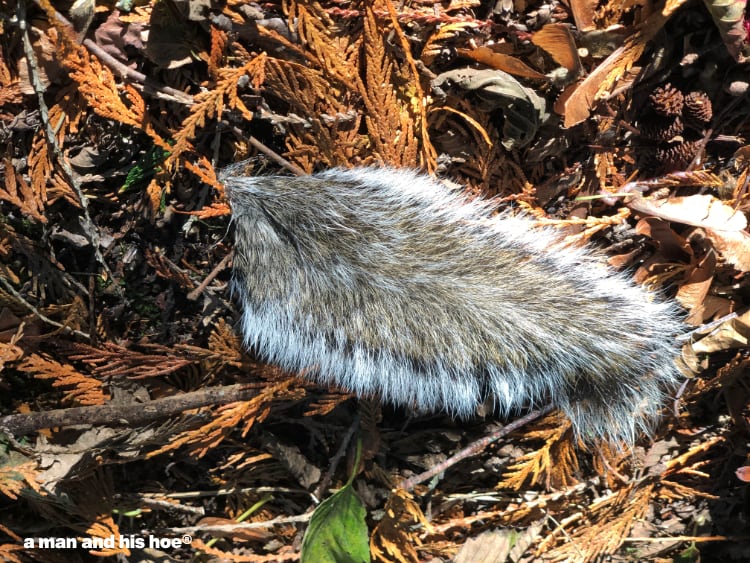 I don’t want the chickens to share the fate of the squirrel this tail belonged to. I found the tail on a trail in the woods. I don’t have proof that the rest of the squirrel ended up in the bobcat, but chances are good that it did. 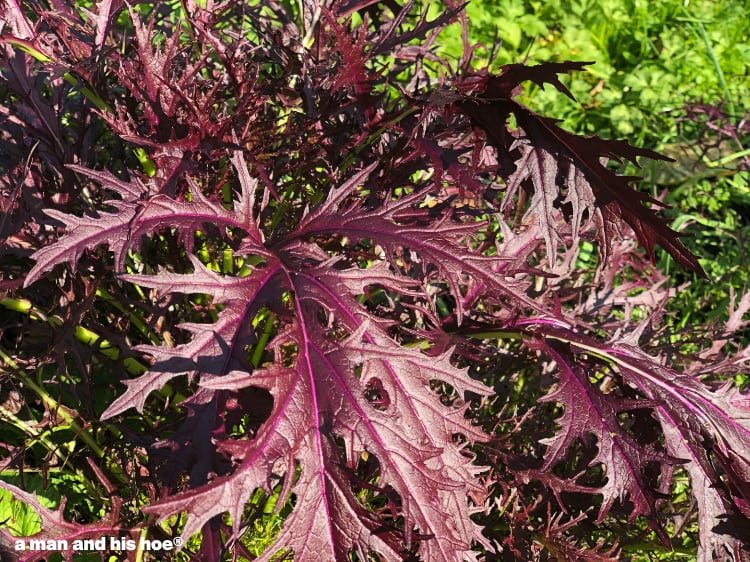 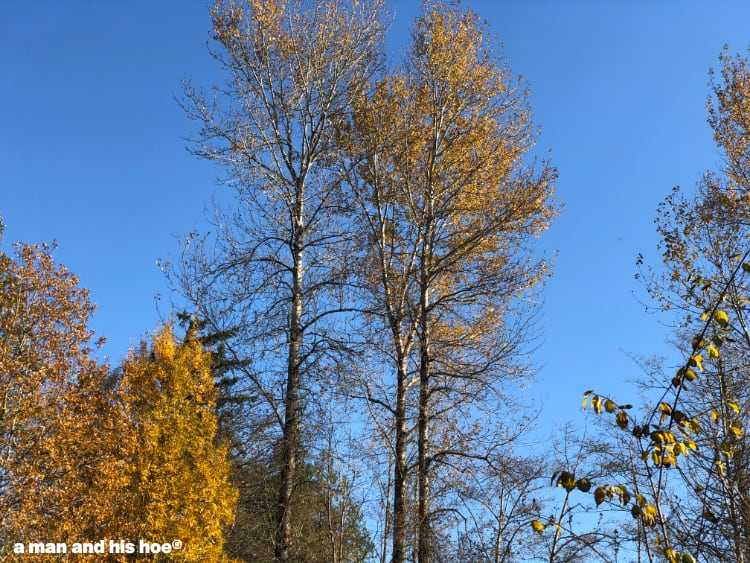 The fall leaves are past their peak. Many are down. Many of the trees are bare. A week of rain and showers is in the forecast. It’s time to take out my rake and enjoy making huge piles of leaves. 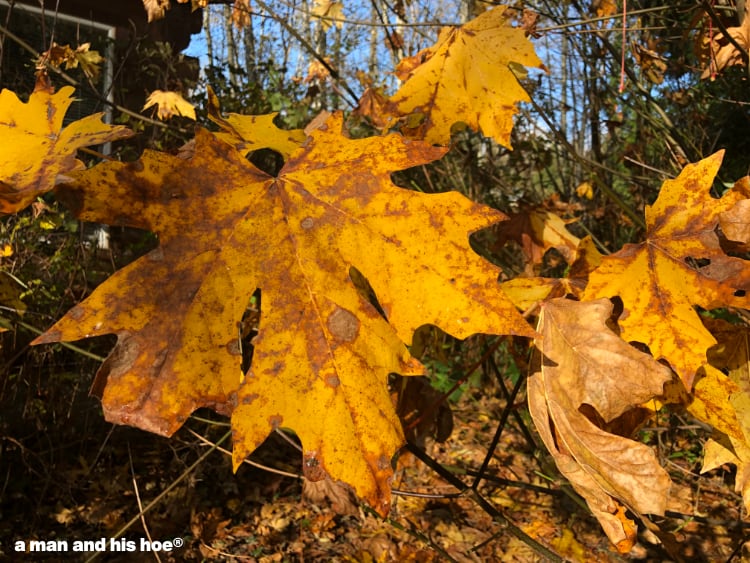 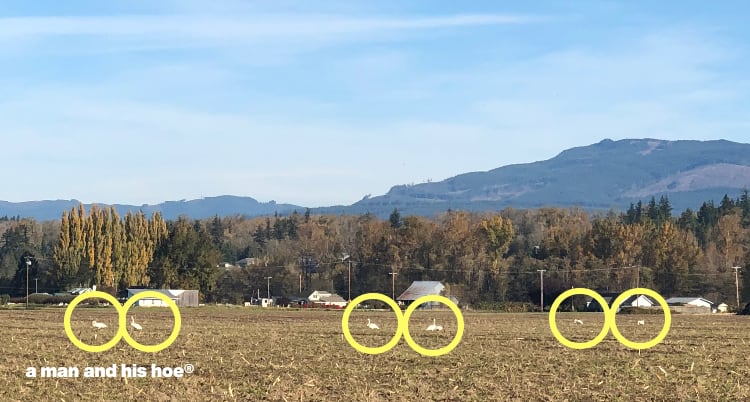 Yesterday while coming home from an errand, I saw swans flying overhead. There were swans in the fields too. At last, it feels like November is here.

According to the clerk in the Bow Post Office, she saw swans yesterday, so they were here on November 1.

Near where the swans were feeding, a flock of snow geese raised a ruckus. With all of them chatting at the same time, how do they know who is talking and who is saying what to whom? It seems worse than trying to carry on a conversation in a noisy restaurant. Is the loudest snow goose yelling at the others to shut up?

It is amazing that long before humans sailed the seas, bird brained creatures traversed everywhere. In Europe, humans feared dropping off the edge of the earth if they ventured too far out to sea. Bird brained albatross and boobies had no such fear. Unbound by fairy tales and superstitions, they took to flight and roamed the seas. Arctic terns flew back and forth from the Arctic to the Antarctic, a feat humans wouldn’t accomplish until recently.

Tens of millions of years before humans came into existence, birds filled the skies. They had all this how-to-navigate-the-globe figured out long before the first human began chiseling crude symbols into stone. If humans had listened to the birds, they wouldn’t have come up with the nonsense about falling off the edge of the world. Birds could have told us that there is no edge, that you just keep going round and round and round. We weren’t listening. 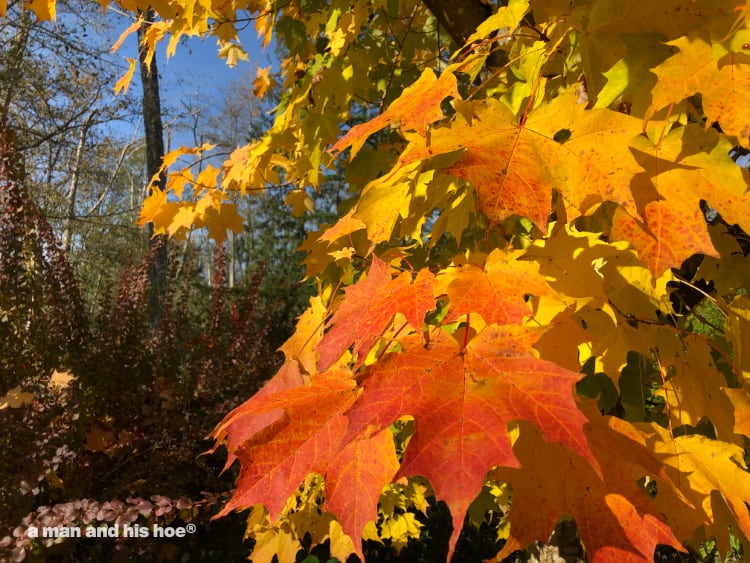 Today is the first of November. In many years, the swans have flown in from Alaska and Siberia by now. On a number of years, I’ve seen them first flying on November 1, but not this year. Today’s blue skies had no swans. 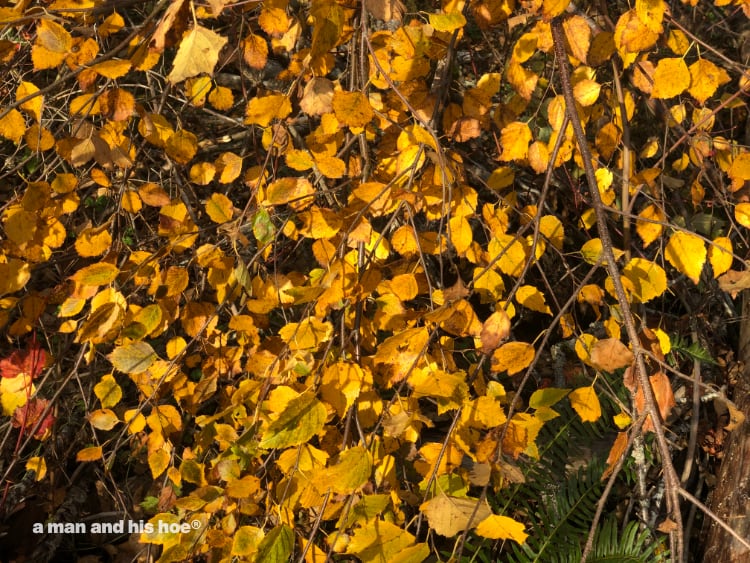 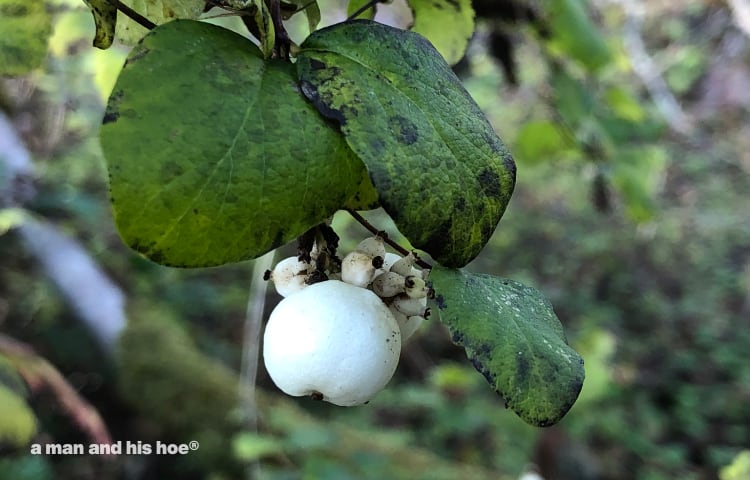 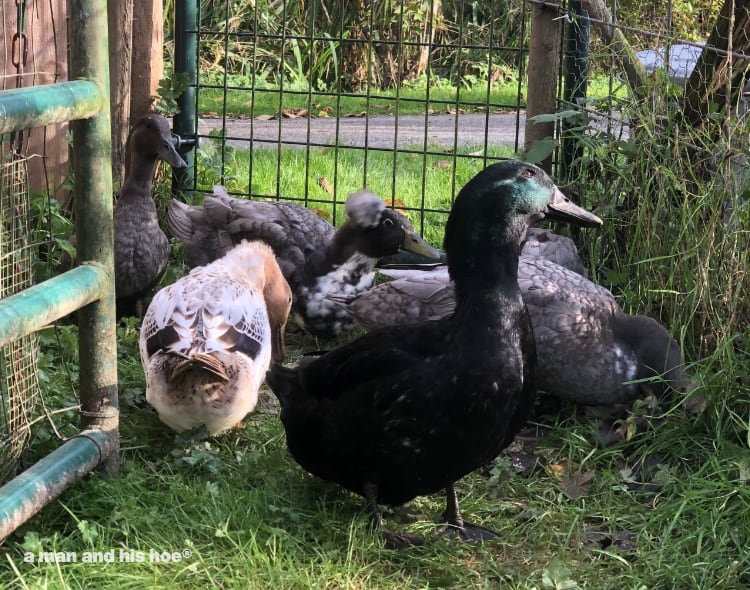 The nearly grown ducklings are in training. Tomorrow they will be graduating from the tank in the garden to the pond. To reduce the trauma of me picking them up and carrying them to the pond, they are getting used to eating between the two gates leading into the garden. I can trap them in that enclosure, pick them up easily, and quickly carry them to the pond. 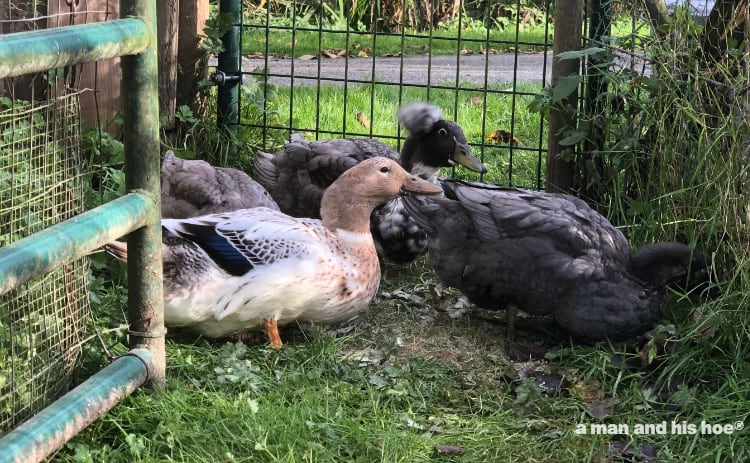 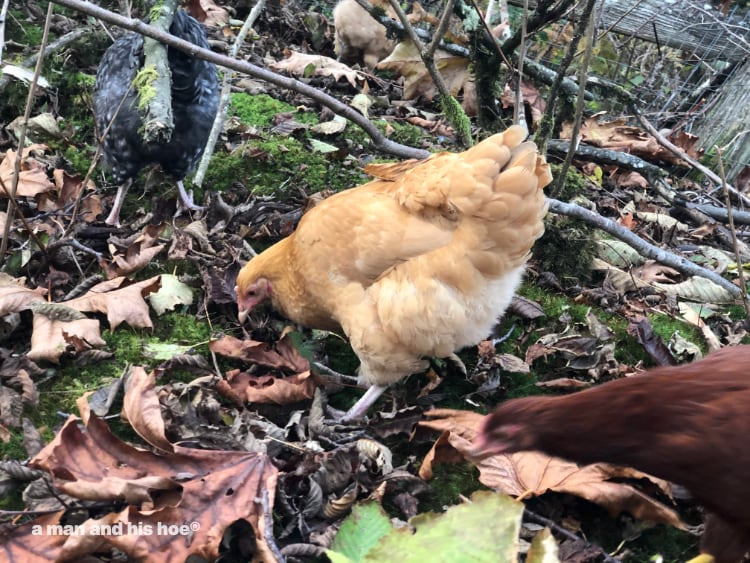 The chickens enjoy dry autumn days as much as I do. They find an endless supply of things to eat under the dried leaves. 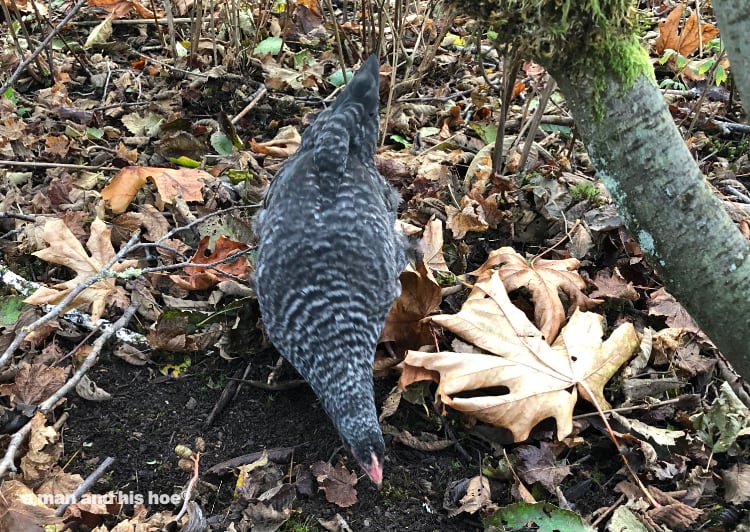