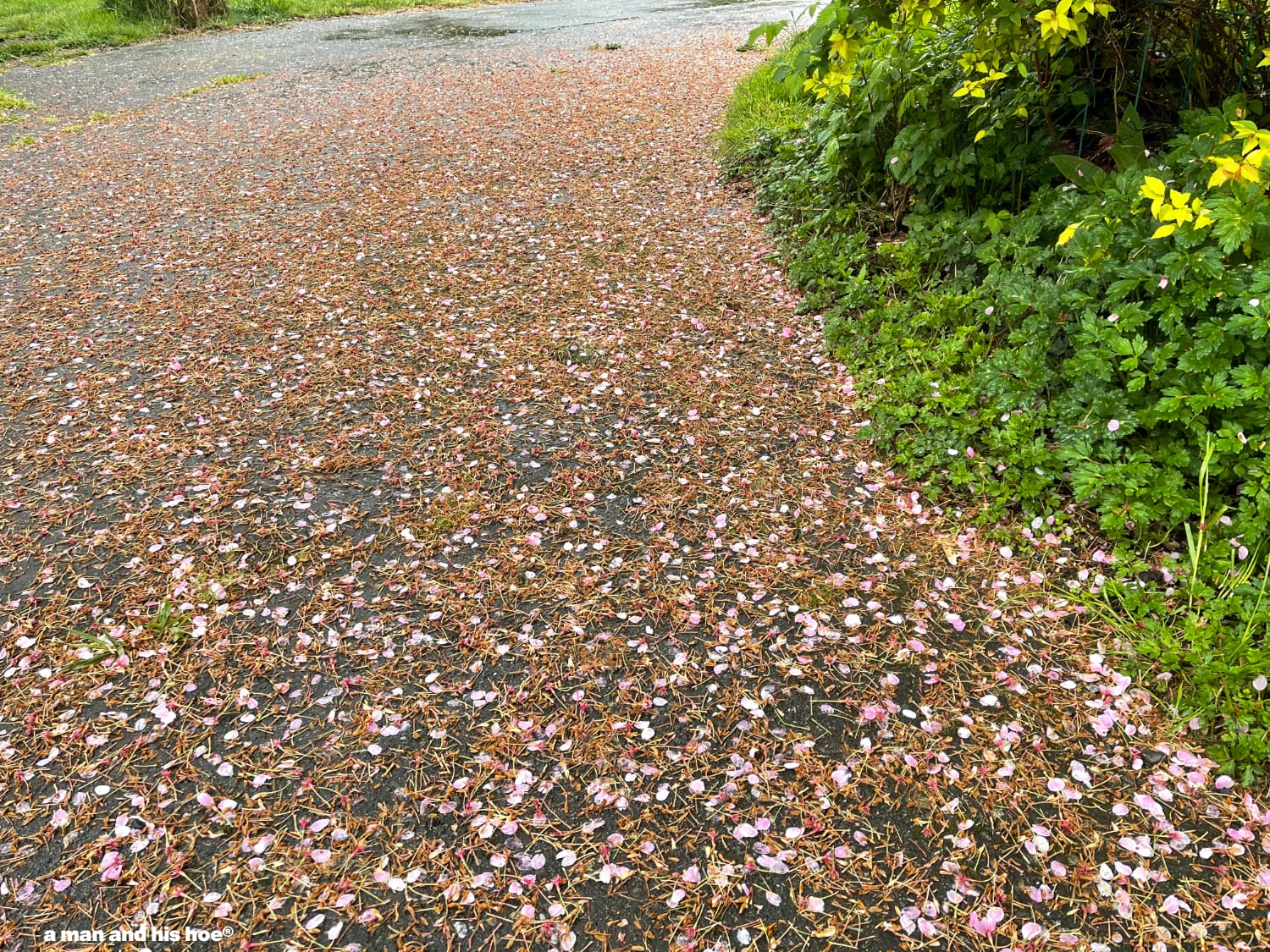 Last week’s brilliant white cloud of cherry trees is now a carpet of faded petals and stems. Soon to be swept up and forgotten. 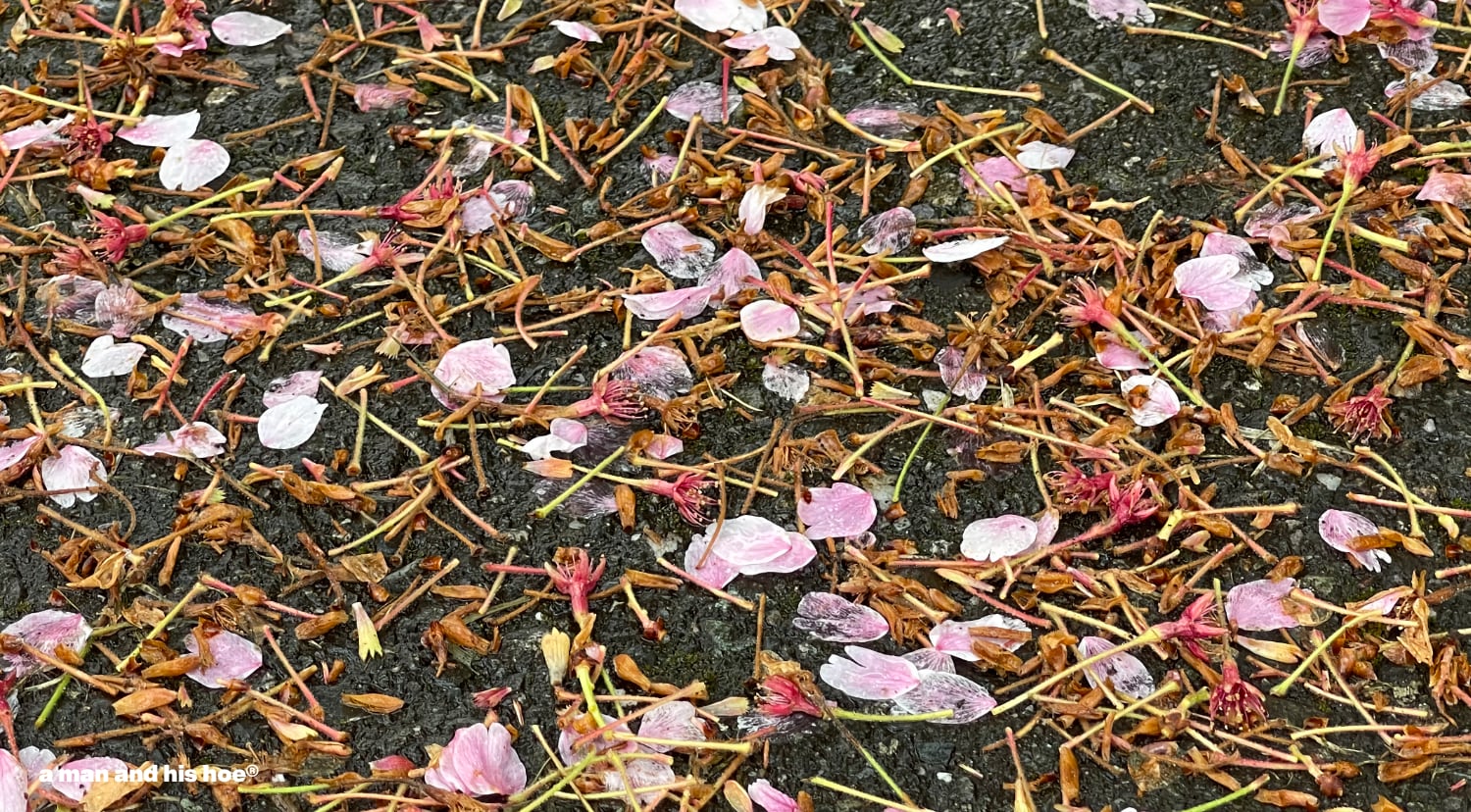 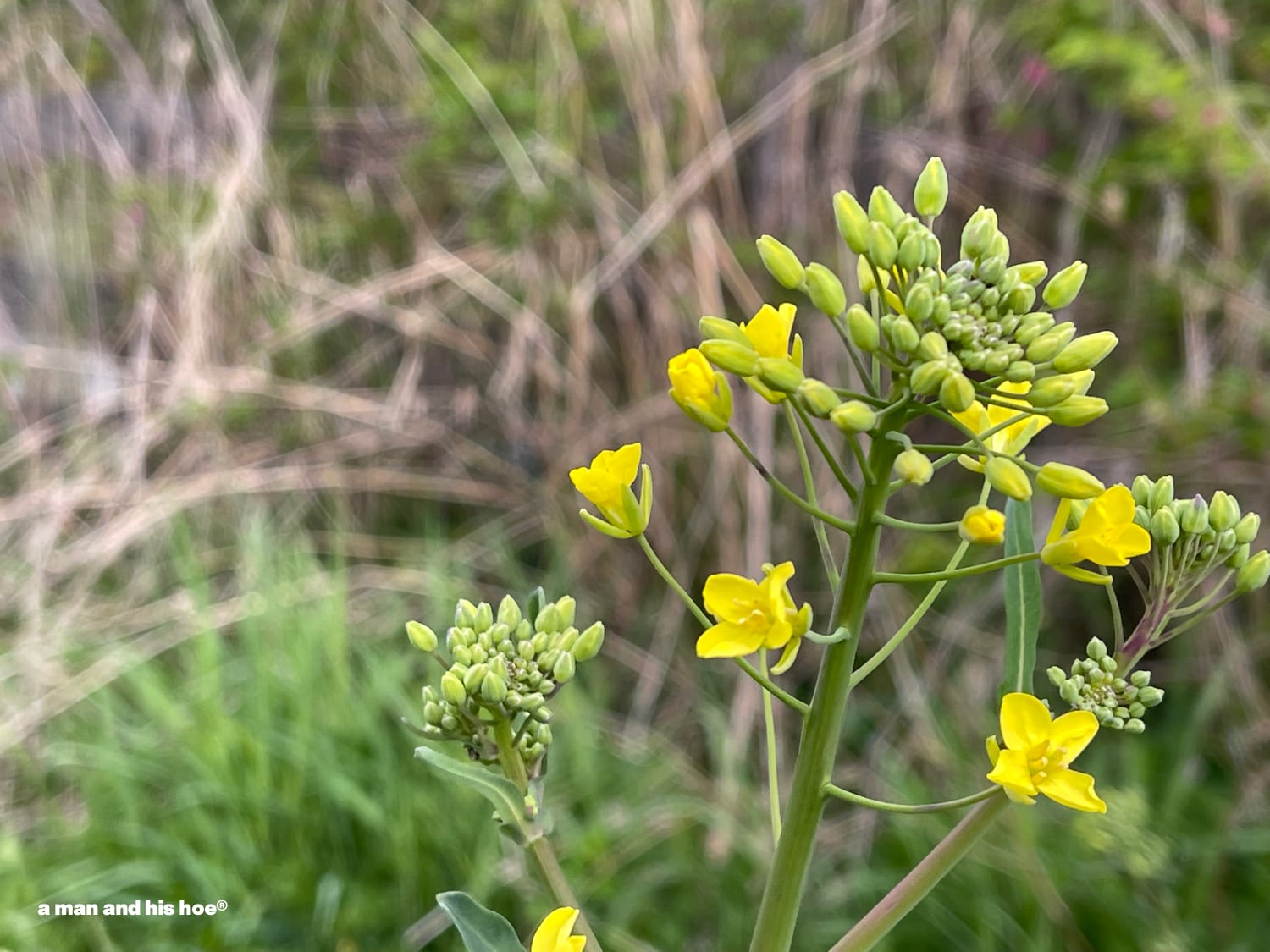 The kale that over-wintered is in bloom. Over-wintered kale is a treat. Deep freezes sweeten the leaves. To keep its leaves alive, kale floods them with sugars to keep them from freezing. 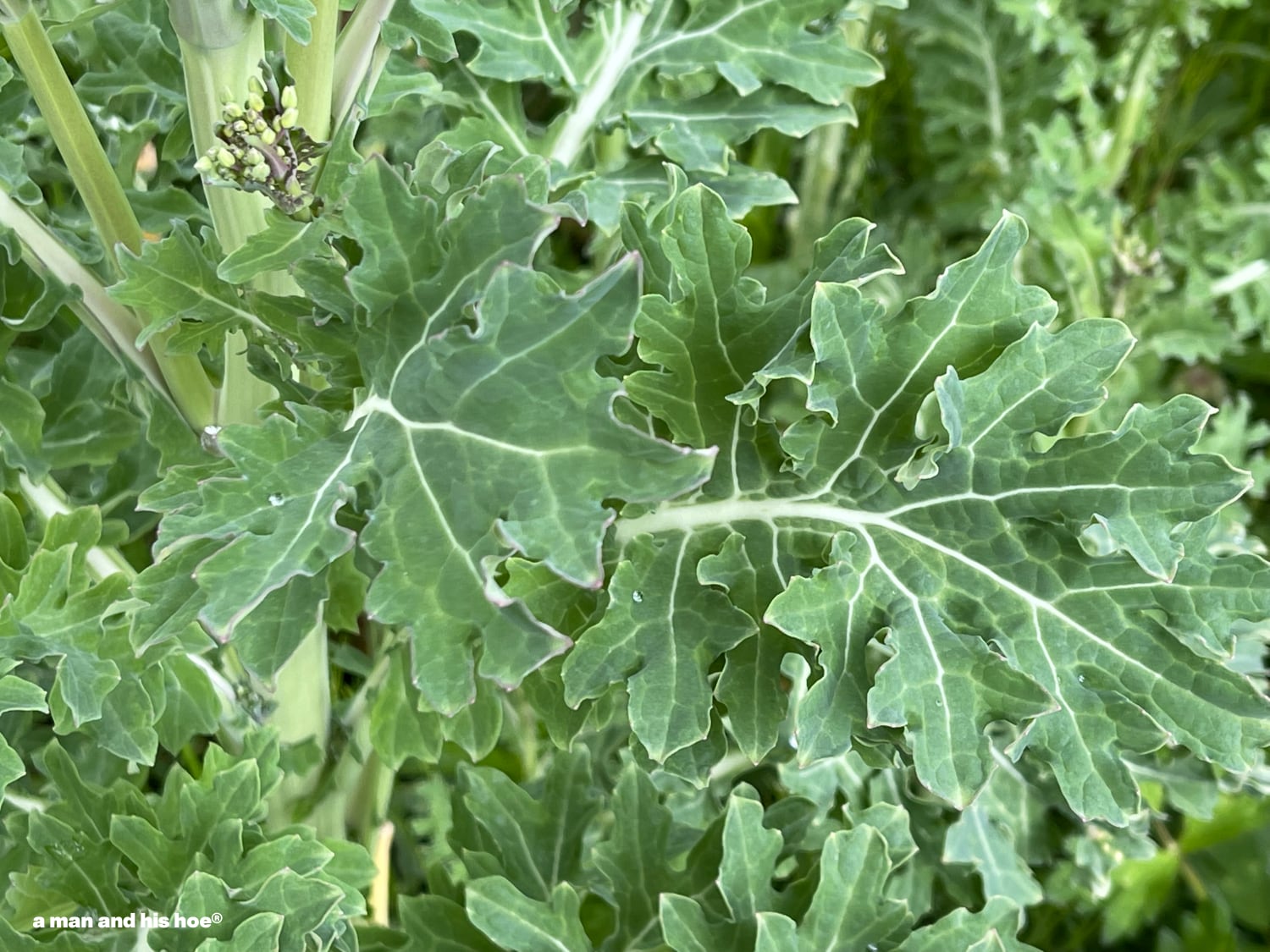 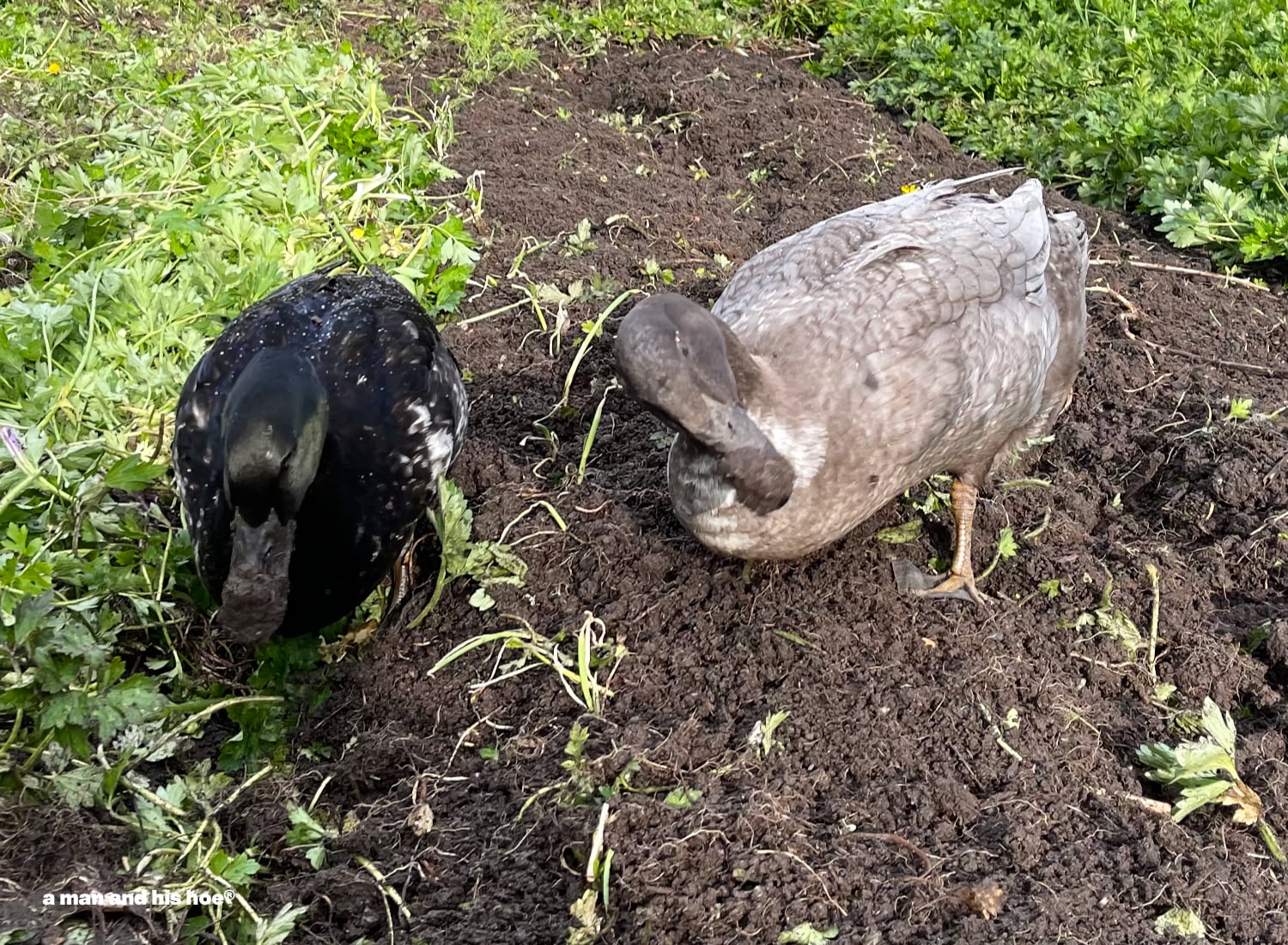 Are the ducks impressed at all with the first potato shoots poking out of the earth? I doubt it. They are more enthralled with all the earthworms they can find in a weeded vegetable bed. 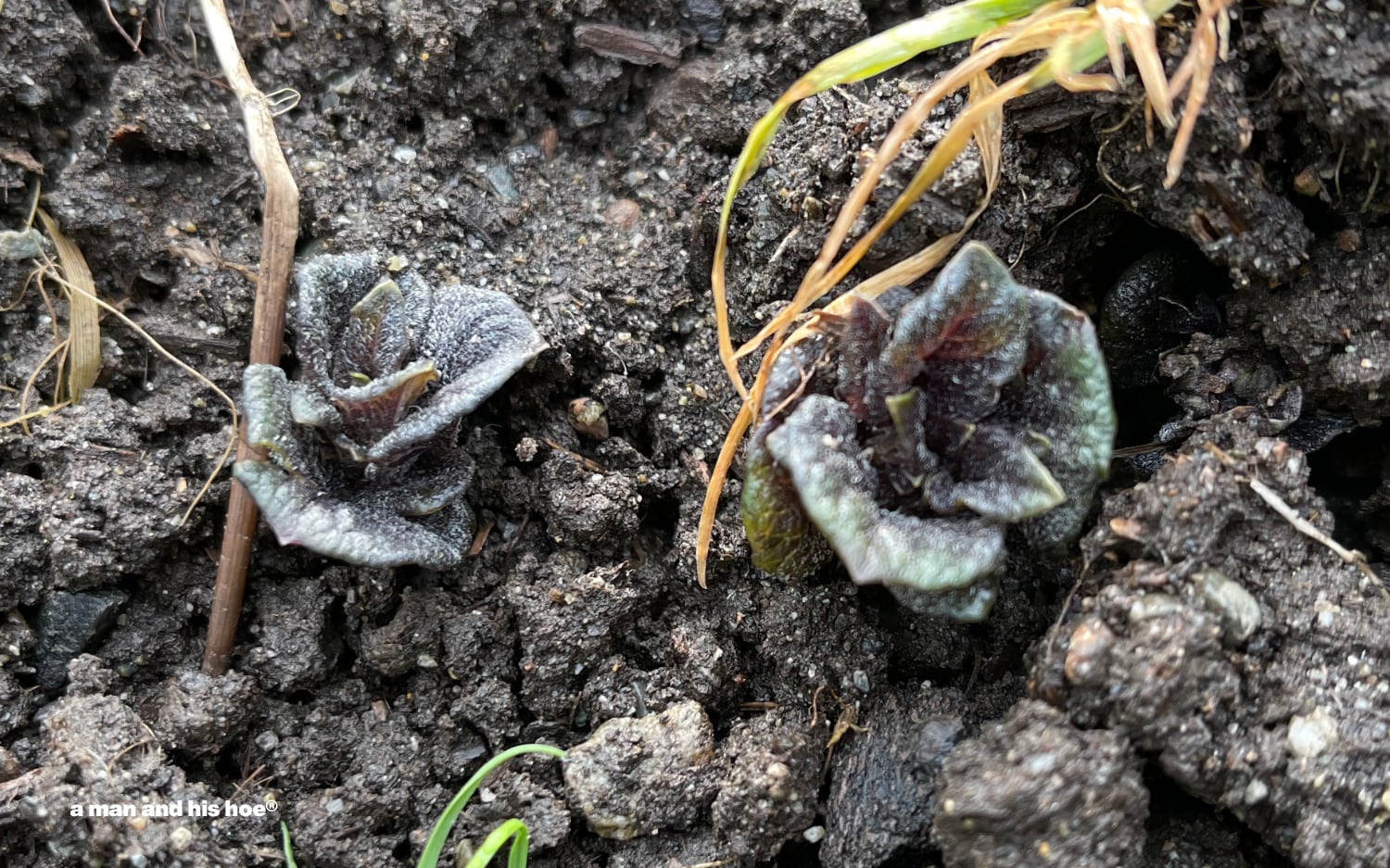 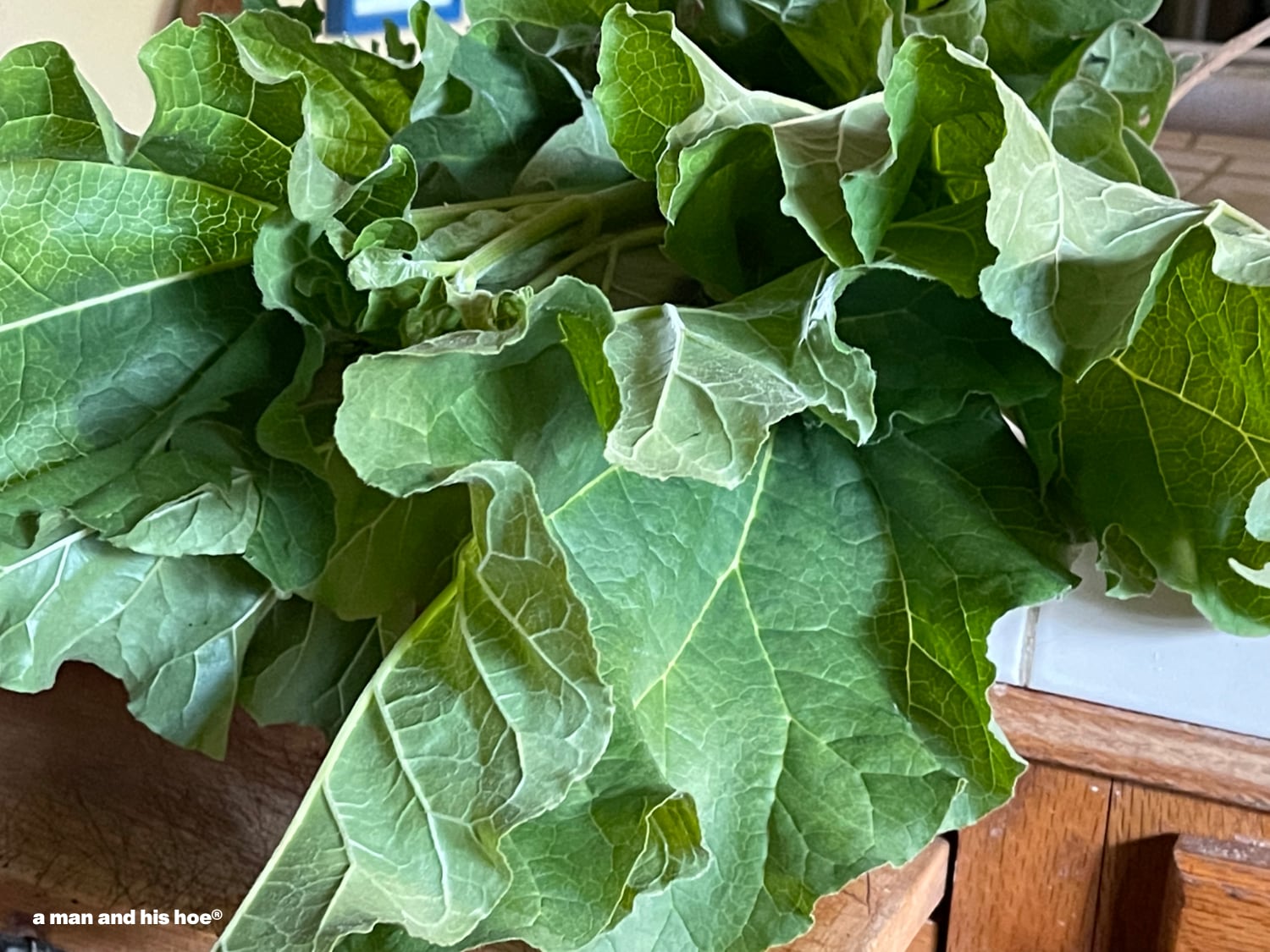 It is rhubarb season. It’s impossible to be sad when there is fresh rhubarb to pick. 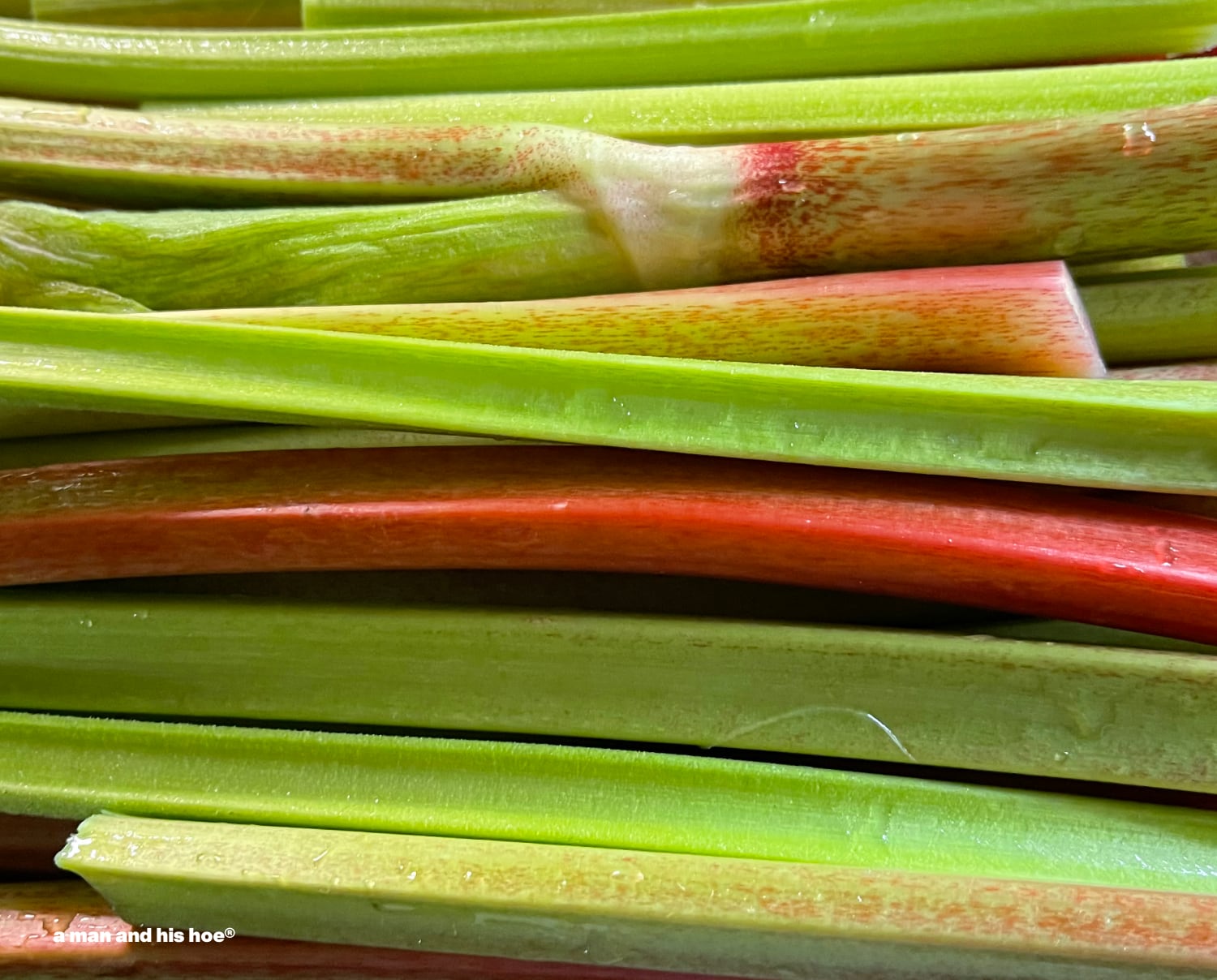 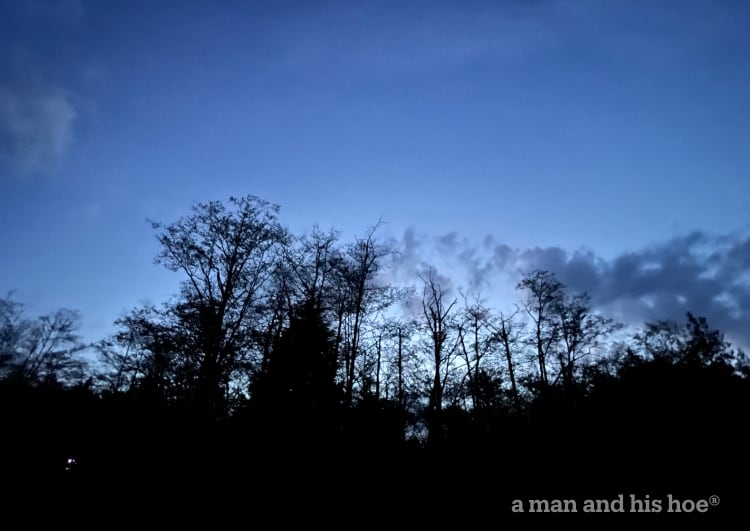 It is the season of bird song. Before dawn breaks birds sing out from all directions. Therapists would probably be out of a job if everyone could step outside in the morning, close their eyes, and listen to the birds sing for even ten minutes. Problems? Worries? The birds sing them all away. 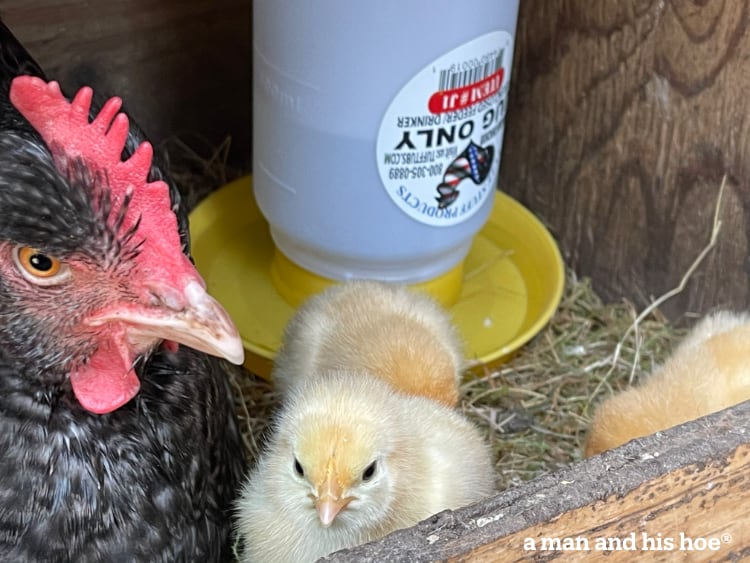 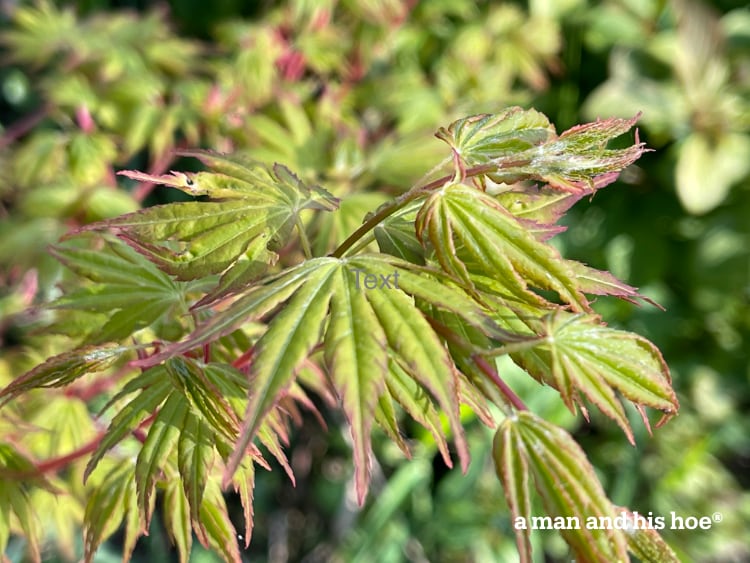 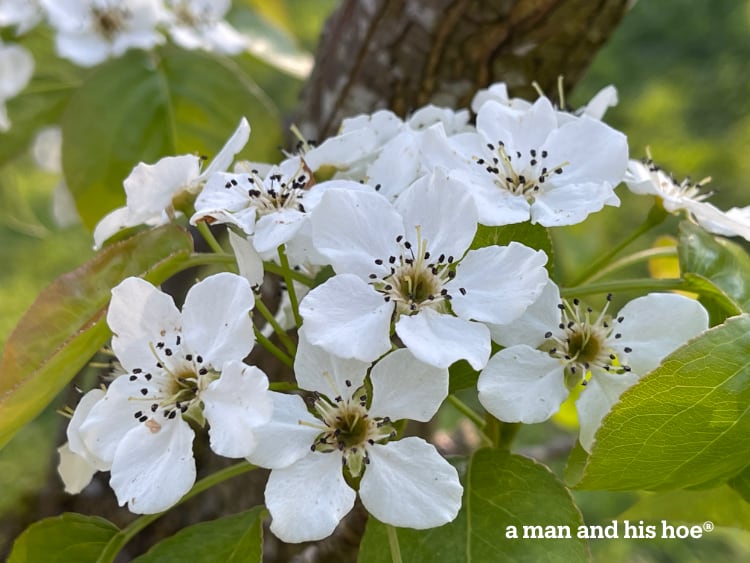 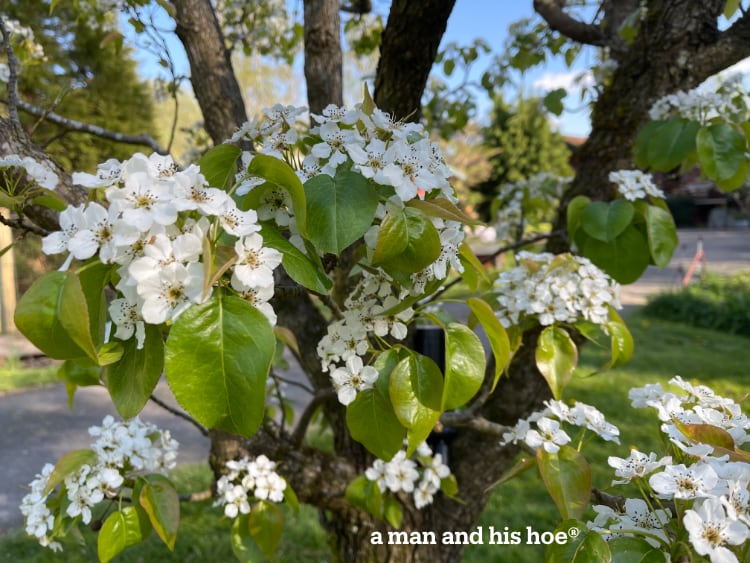 It’s “who-needs-a-therapist?” season. There’s too much to enjoy to have any worries. 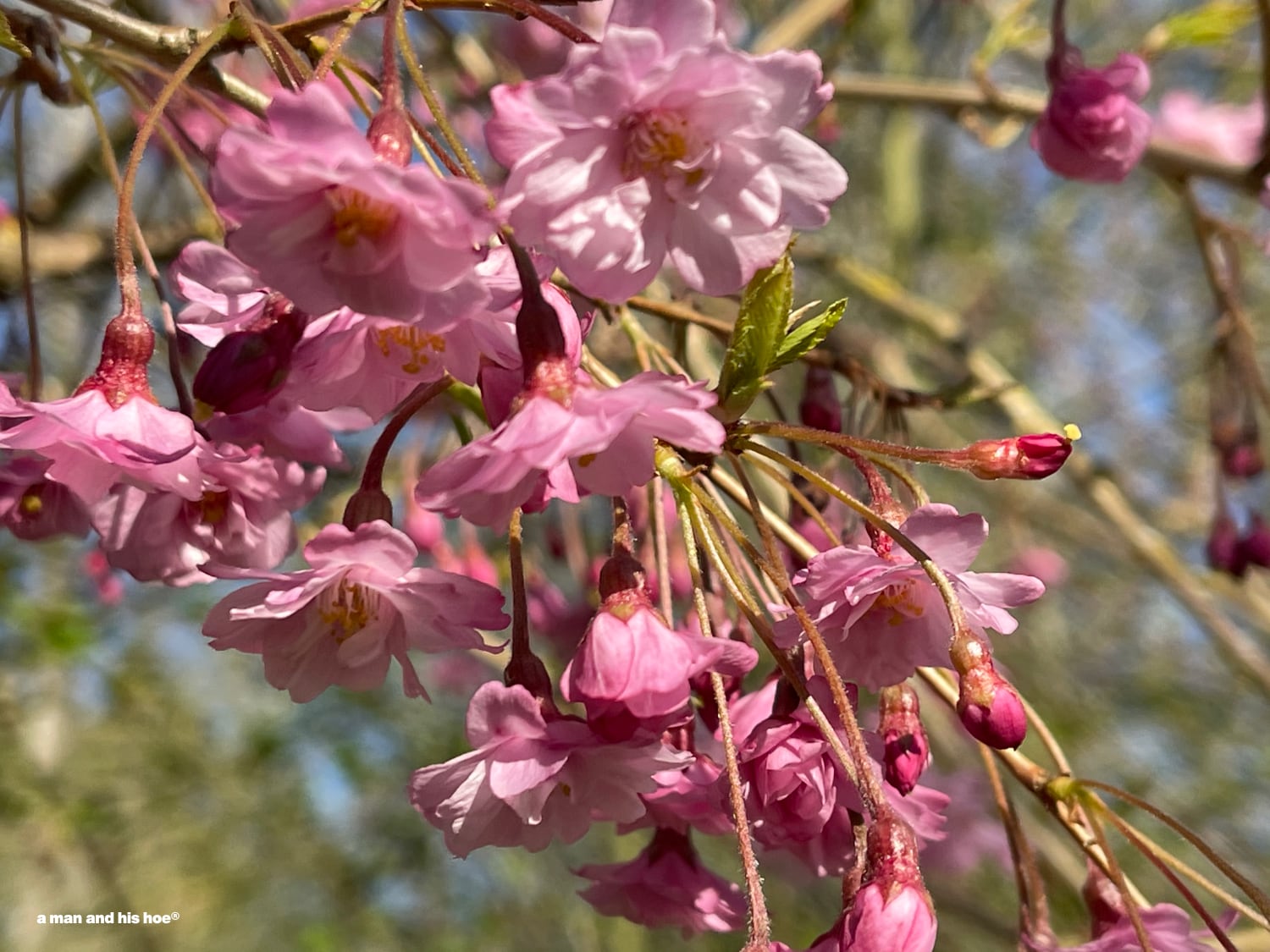 On a frosty morning, it’s hard to say, “This is the last frost.” And such was the case on Monday, April 12. It was 30ºF, -1ºC. But I feel safe to proclaim that April 12 was the last freeze of this season. It’s almost summer like today, and freezing mornings have moved far north with the swans and snow geese. 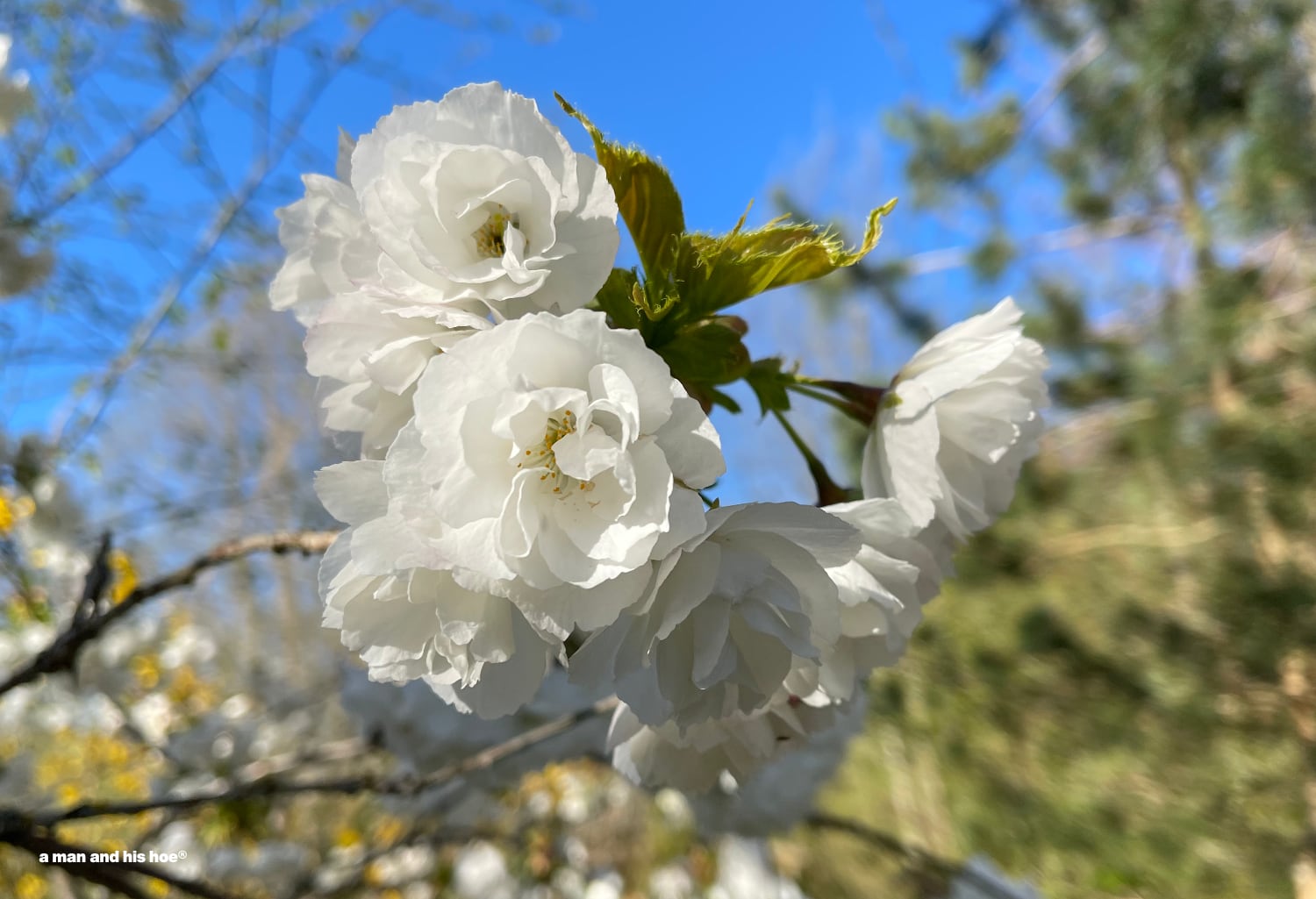 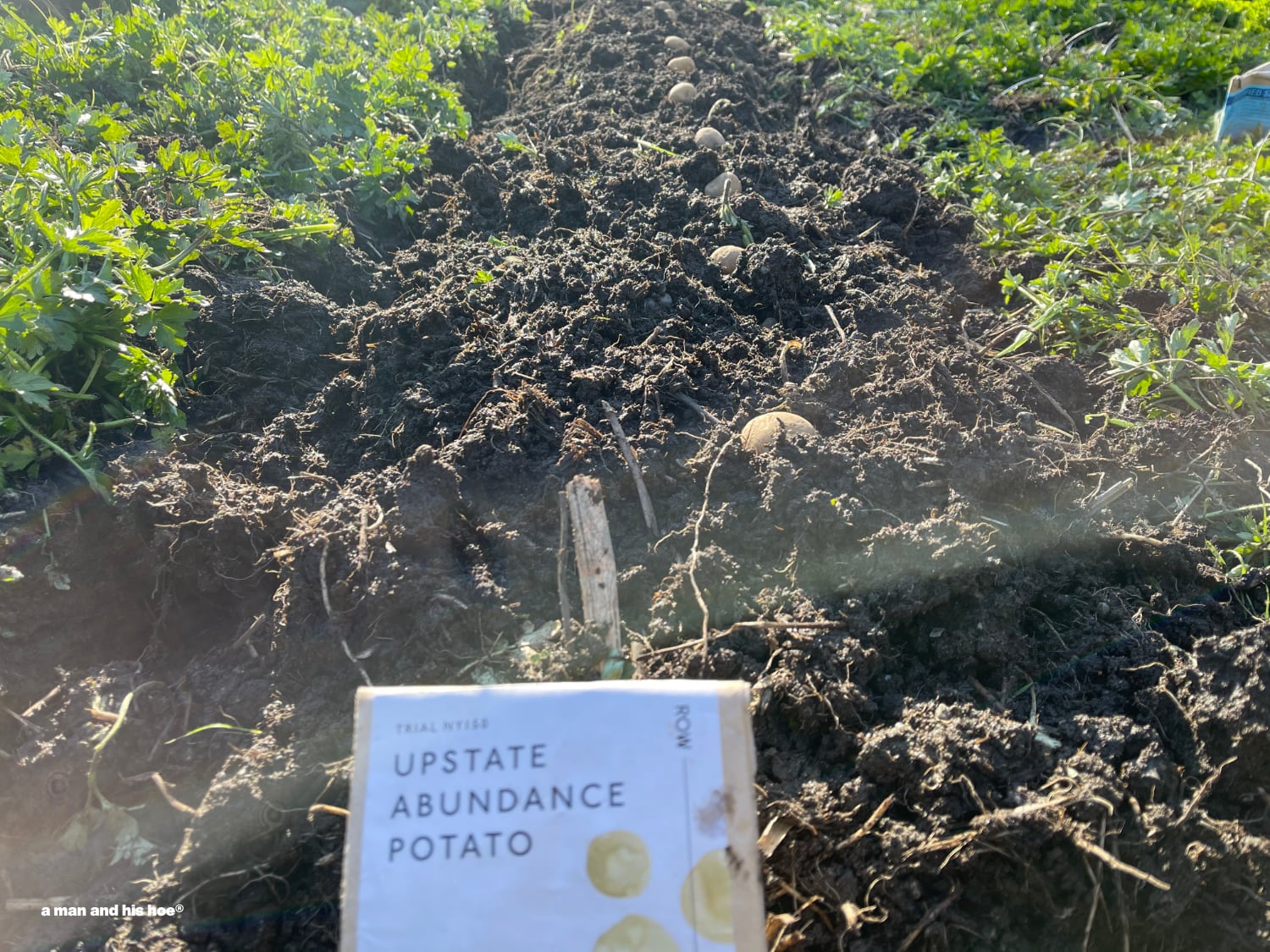 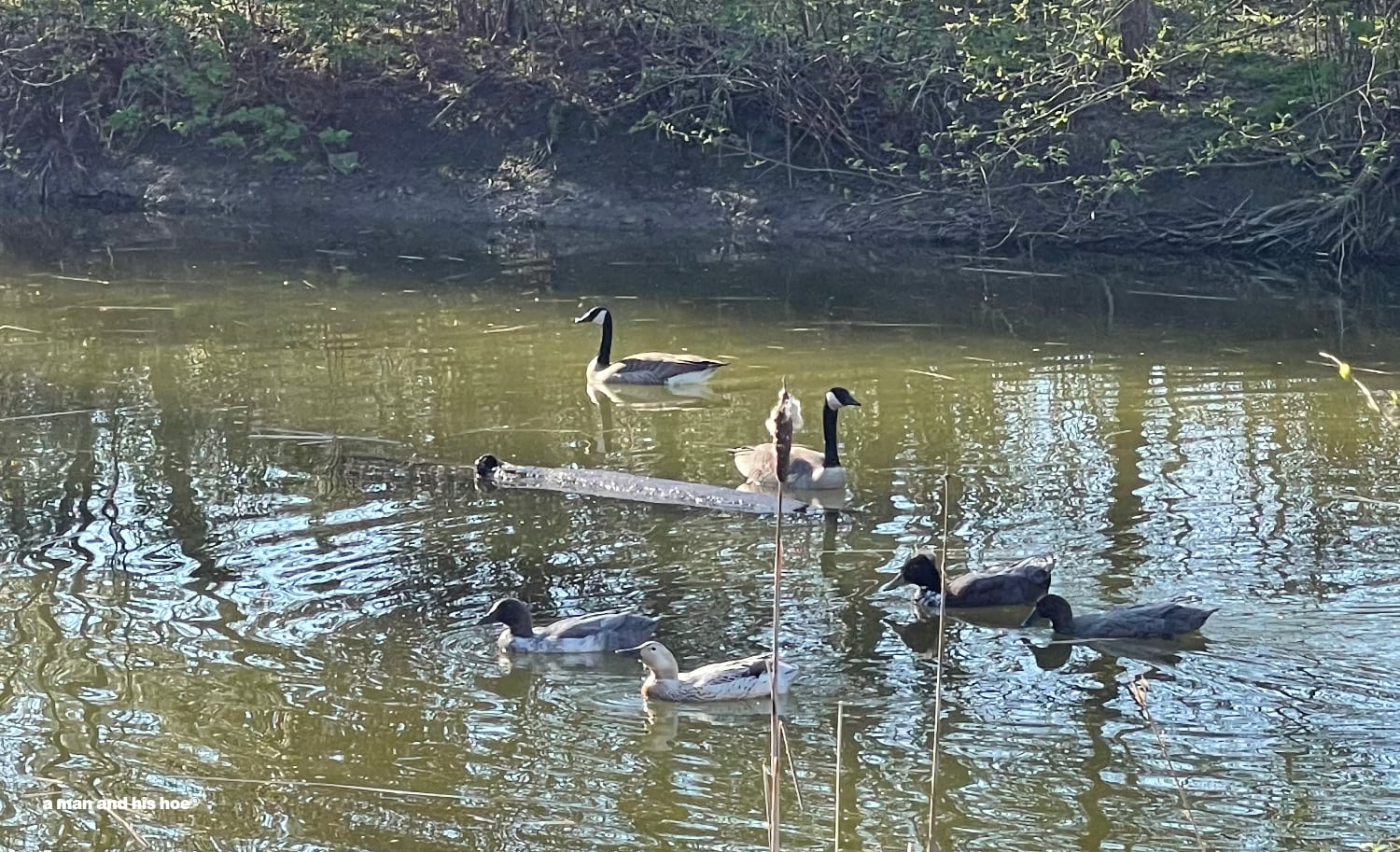 Hearing Canada geese at the pond yesterday was a surprise. They are loud. The pair did not stay long. The ducks weren’t bothered by the much larger birds. The Canada geese were just as loud on their way out, honking as they flew overhead. 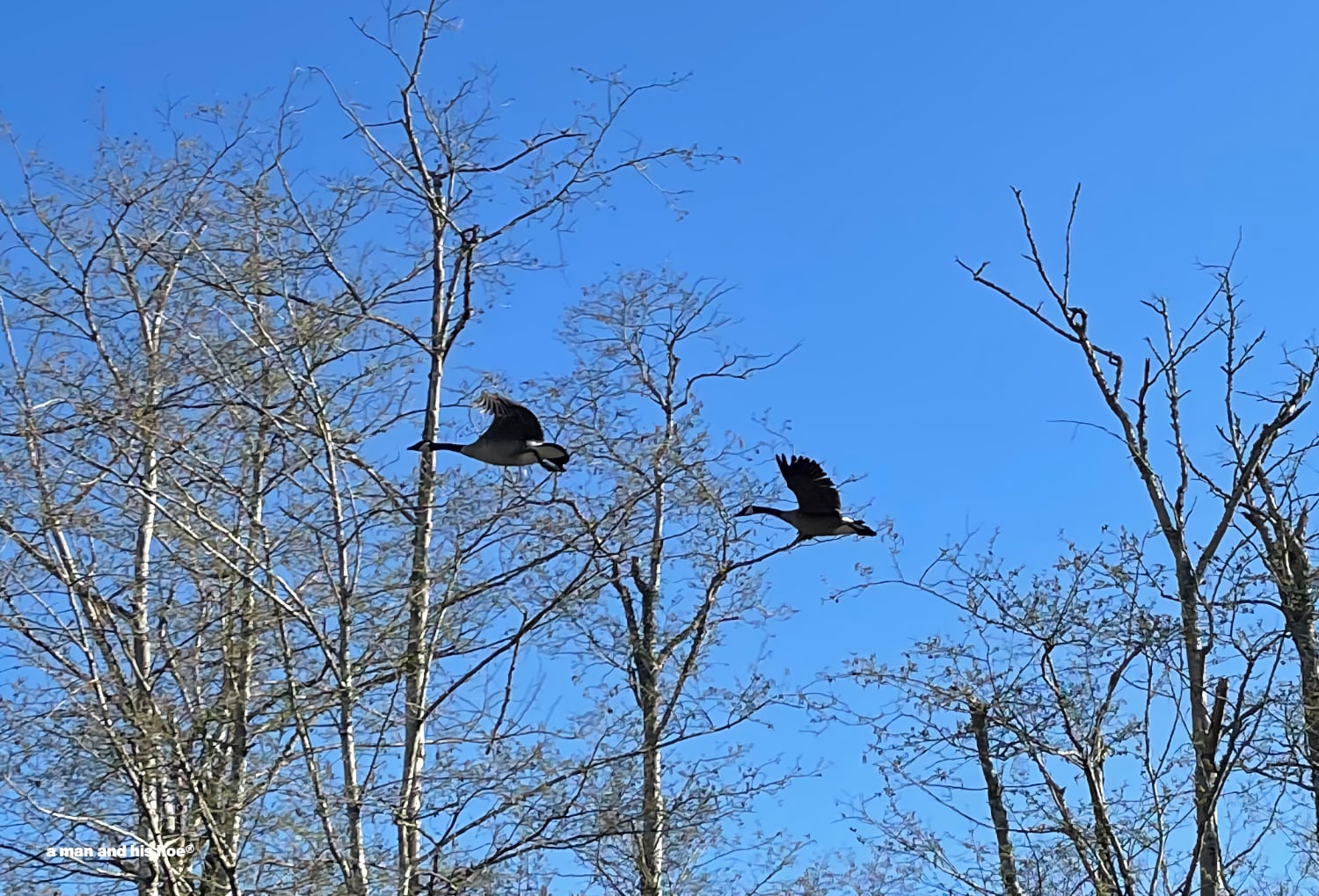 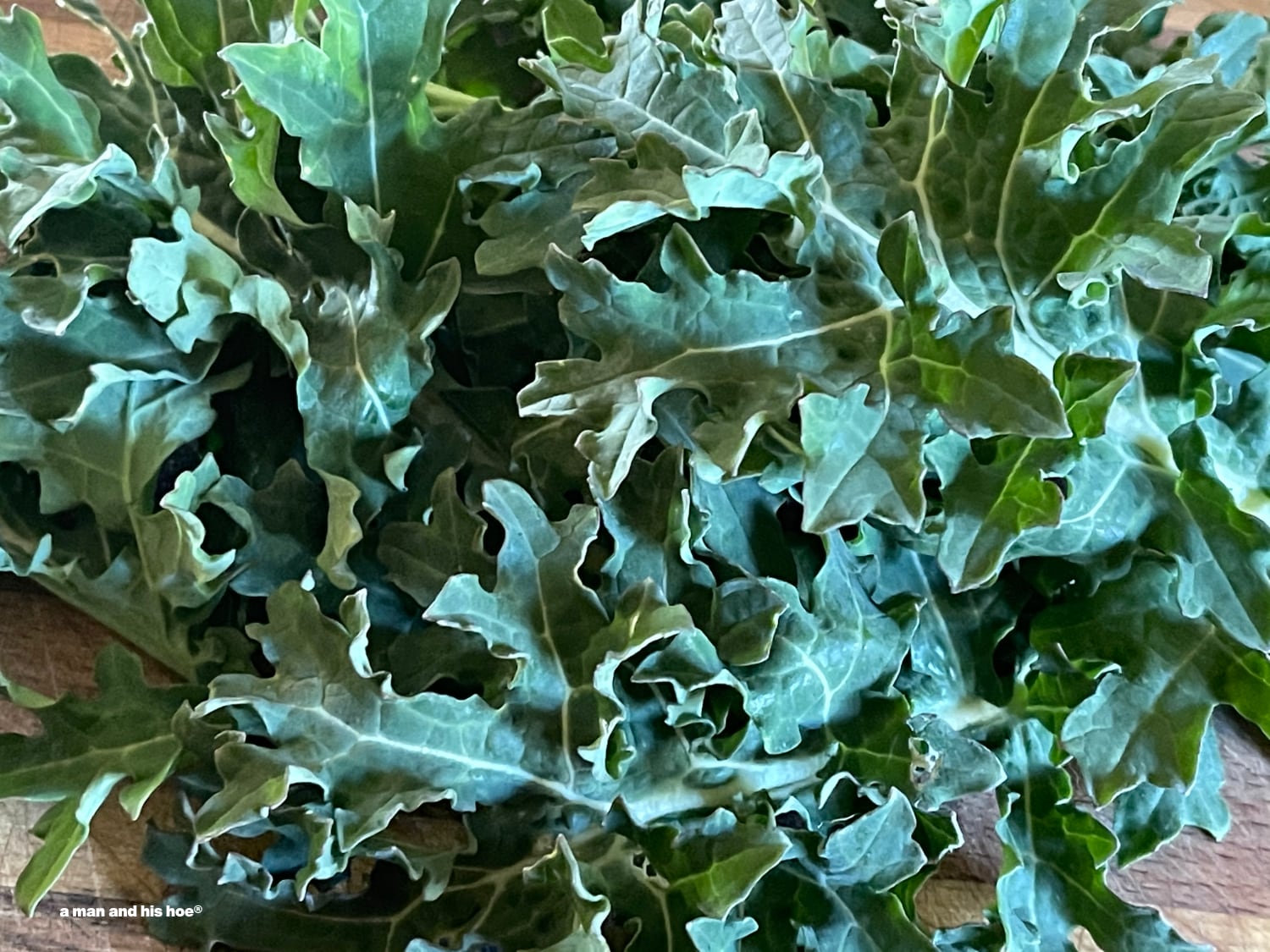 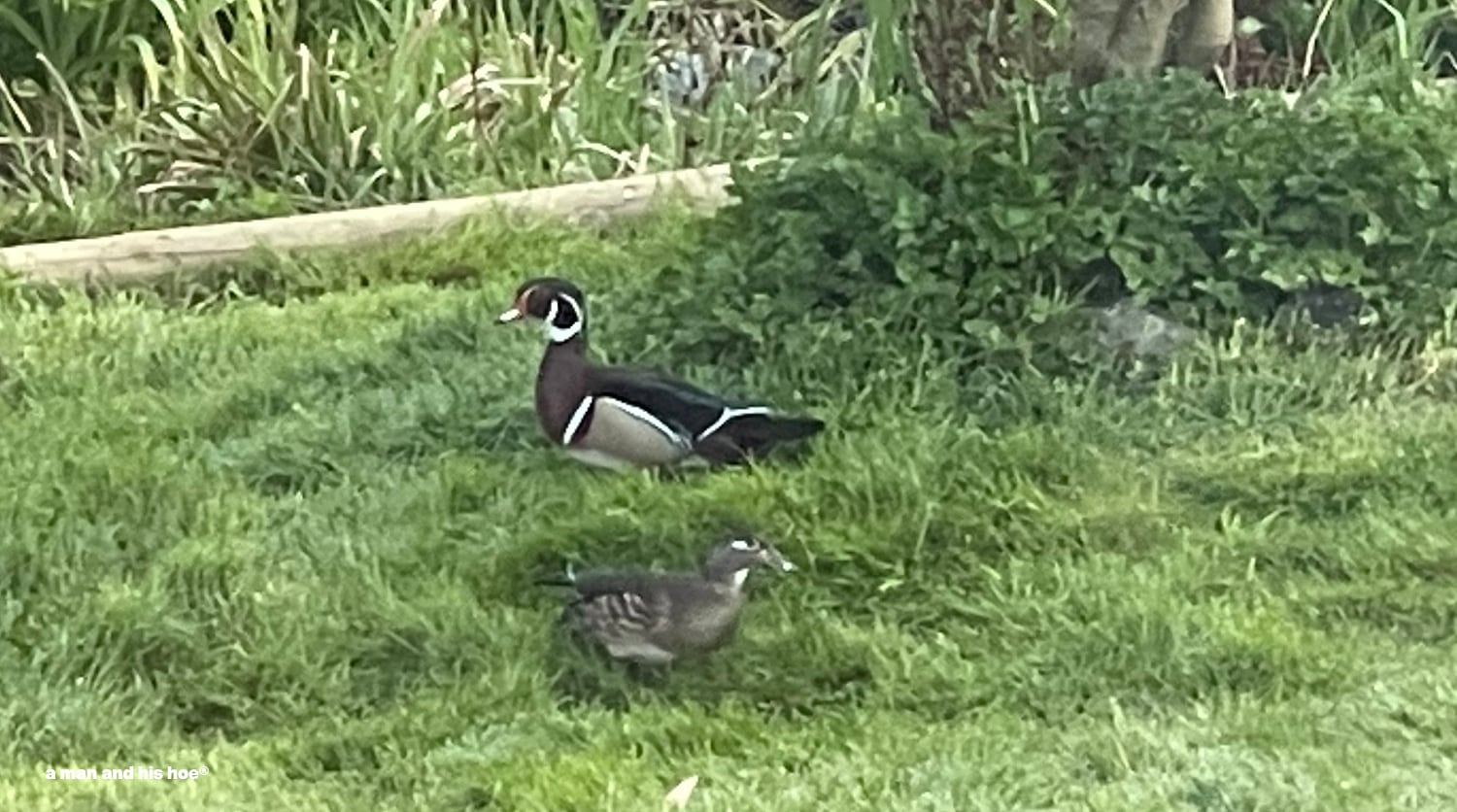 Seeing wood ducks waddle across the driveway early in the morning a few days ago was a surprise too. They were after the scratch the birds drop from the bird feeders. The wood ducks were by this morning too. Which means they may have a nest in a tree stump nearby. 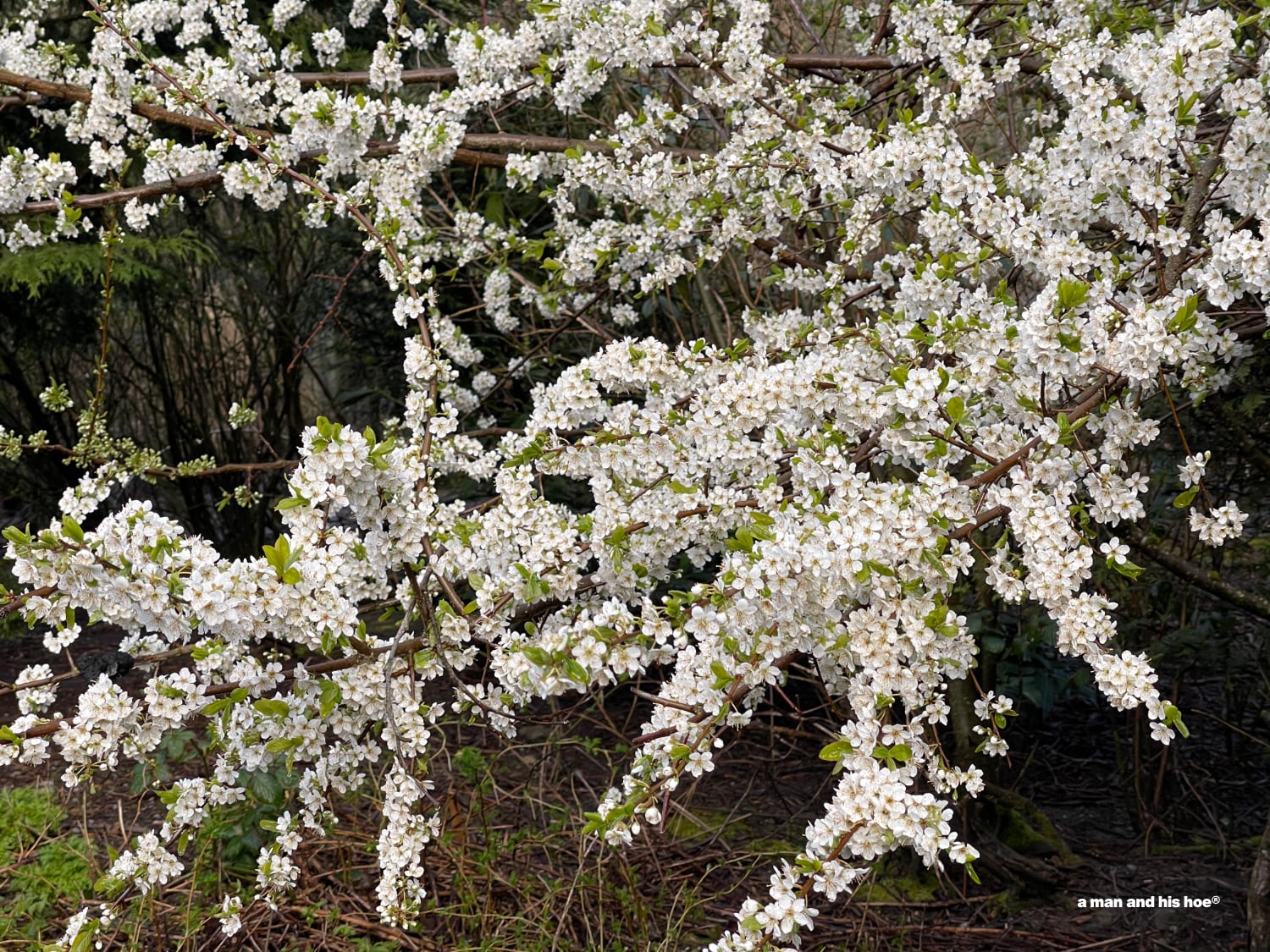 A surprise this morning when I went out to the cabin to make tofu was seeing the fruiting plum trees in full bloom. Last year the plums produced a bounty of sweet plums. Hopefully they will this year too. 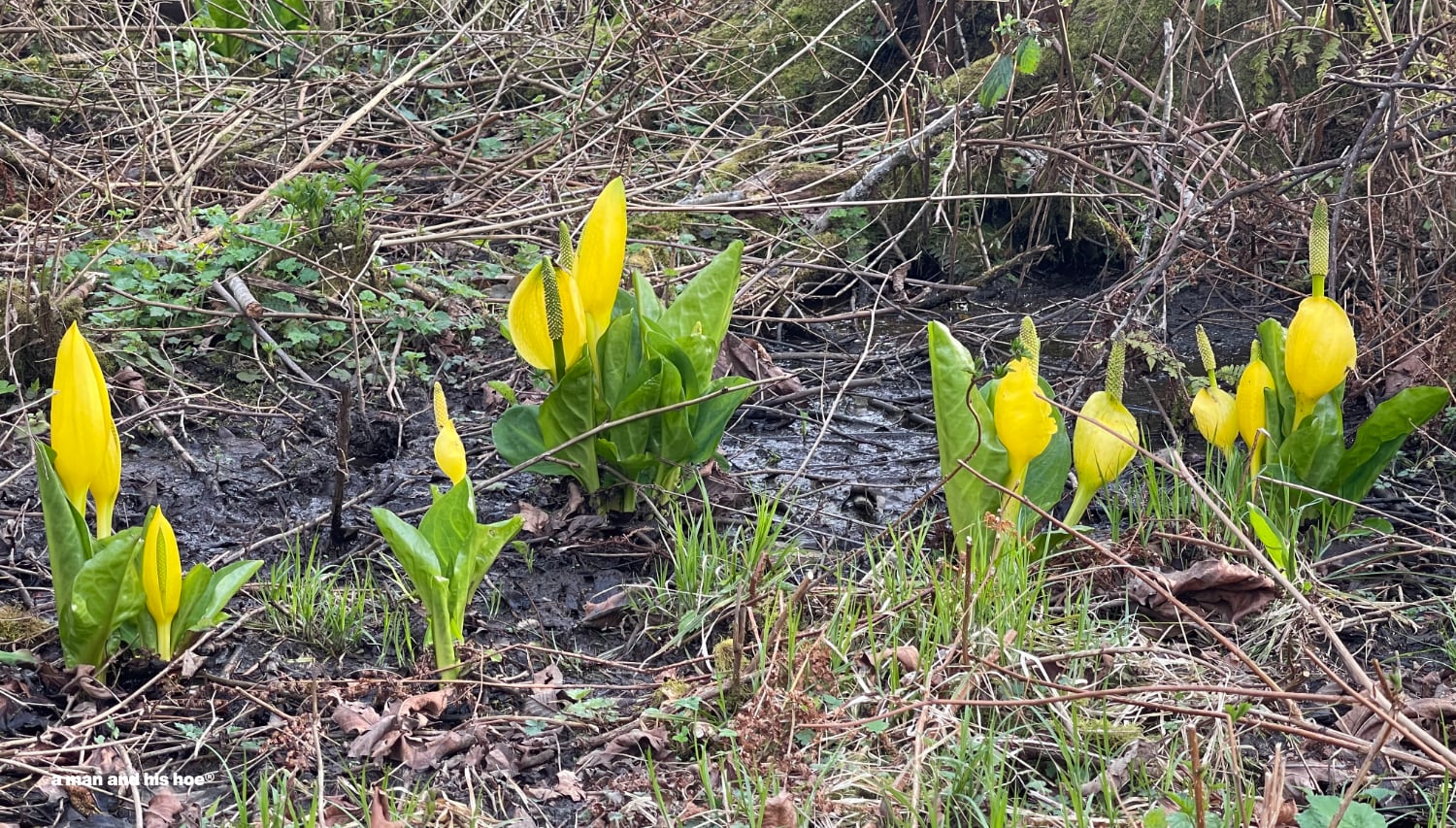 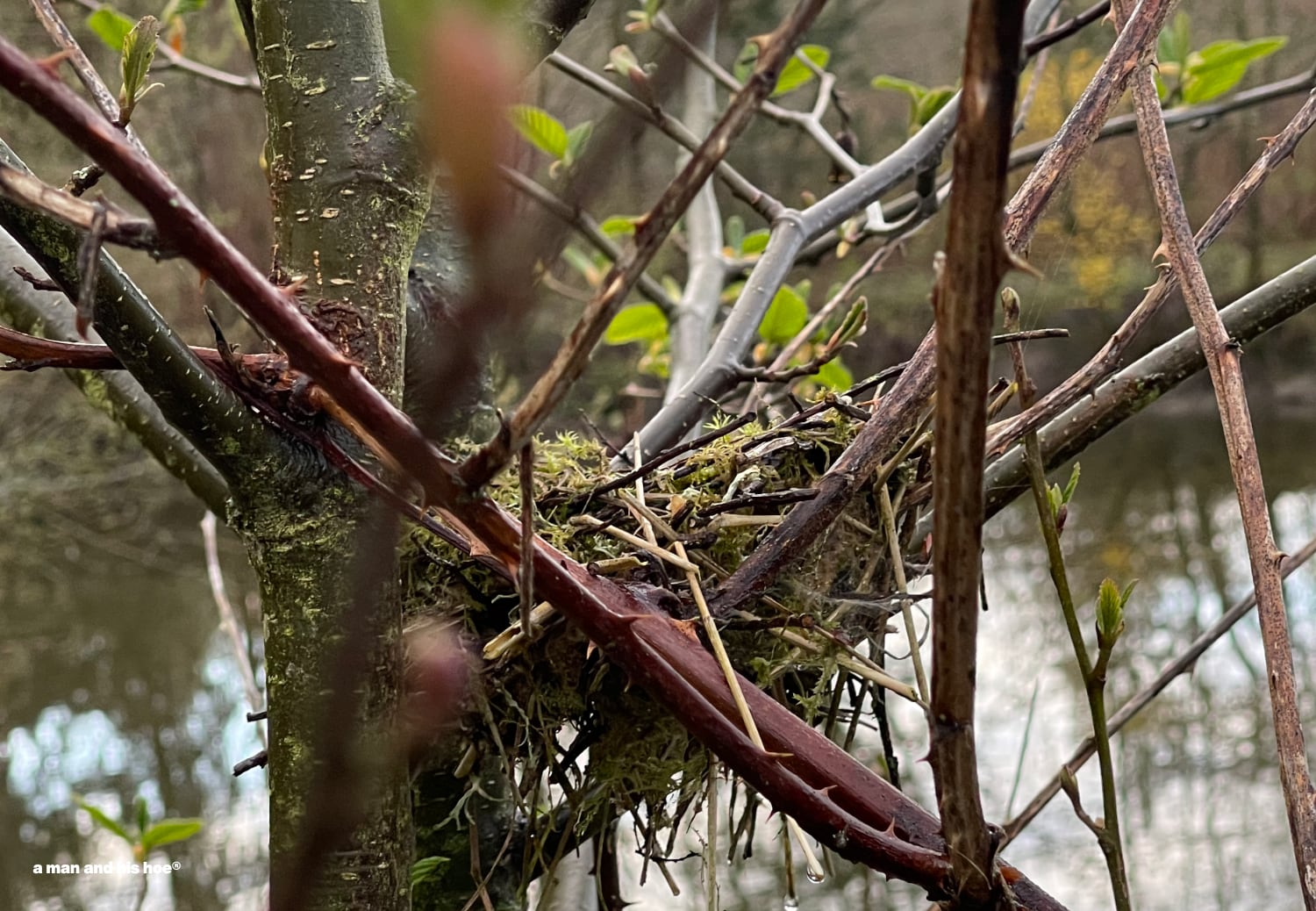 An old nest from last year remains in a young alder by the pond. Soon it will be hidden by new leaves. I’ve walked by this tree all winter and never noticed the nest. Or have I seen it before and forgot about it. Perhaps that is the joy of going senile. You can be surprised by the same thing over and over again. Will some bird use the nest again? It will be interesting to see. 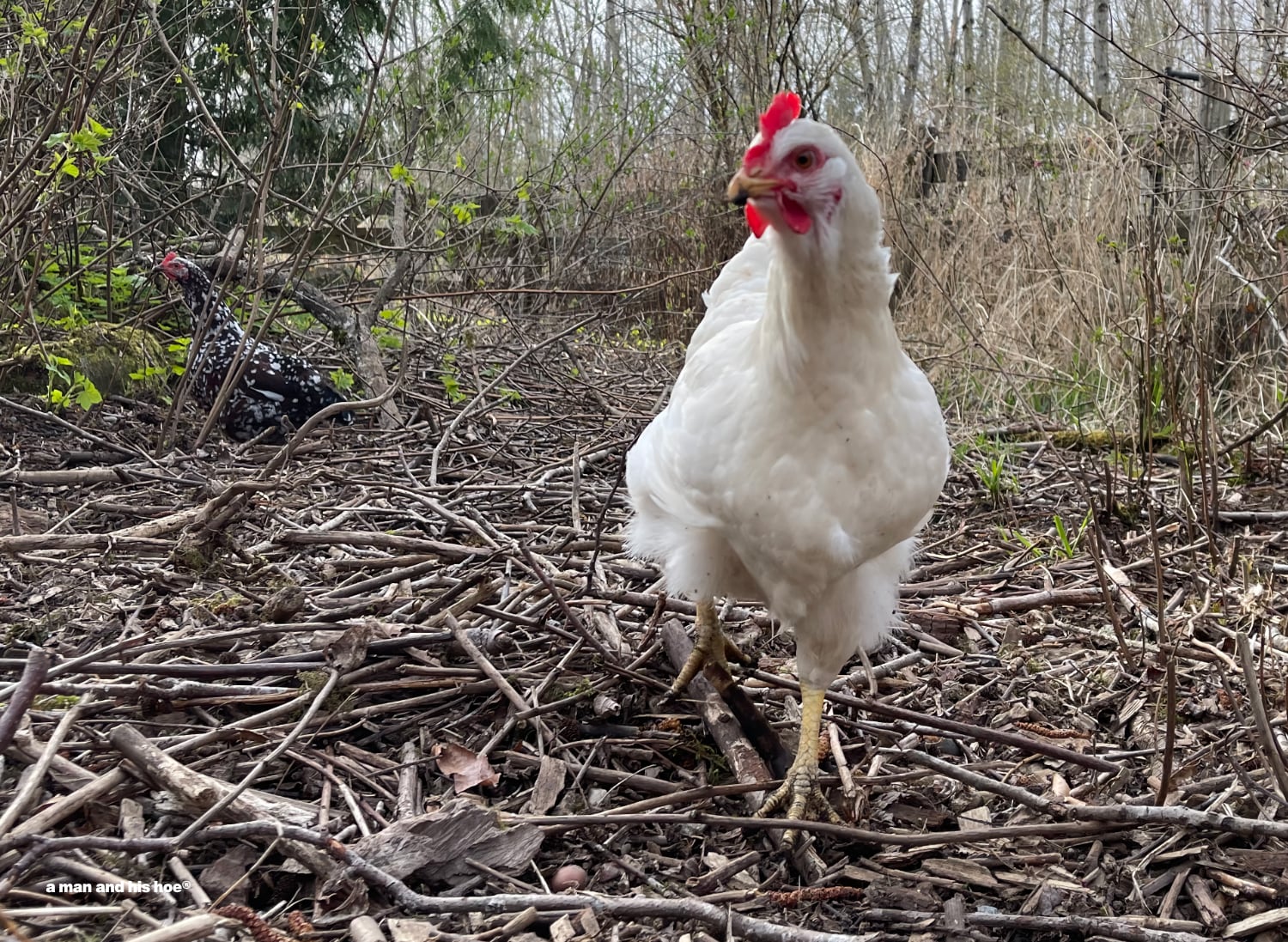 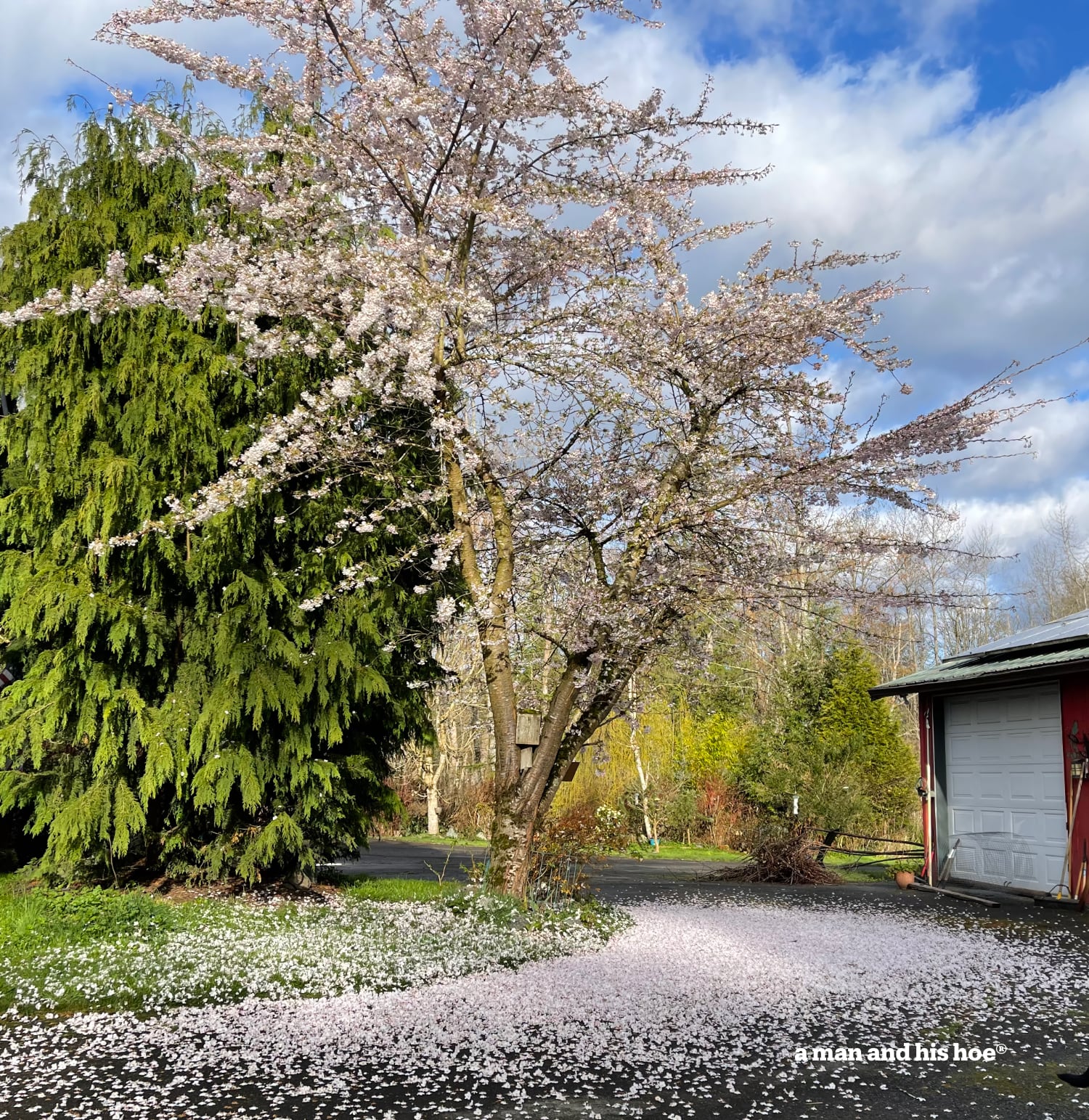 Each year, the blooming cherry puts on a different show. Some years the tree is a cloud of white flowers. Other years the rains knock so many blossoms off, it looks bedraggled. This year it is blooming with a thick carpet of blossoms on the ground below it. A blustery day last week sent a blizzard of flowers falling to the ground. The deep snow underneath the tree is too beautiful to walk on. 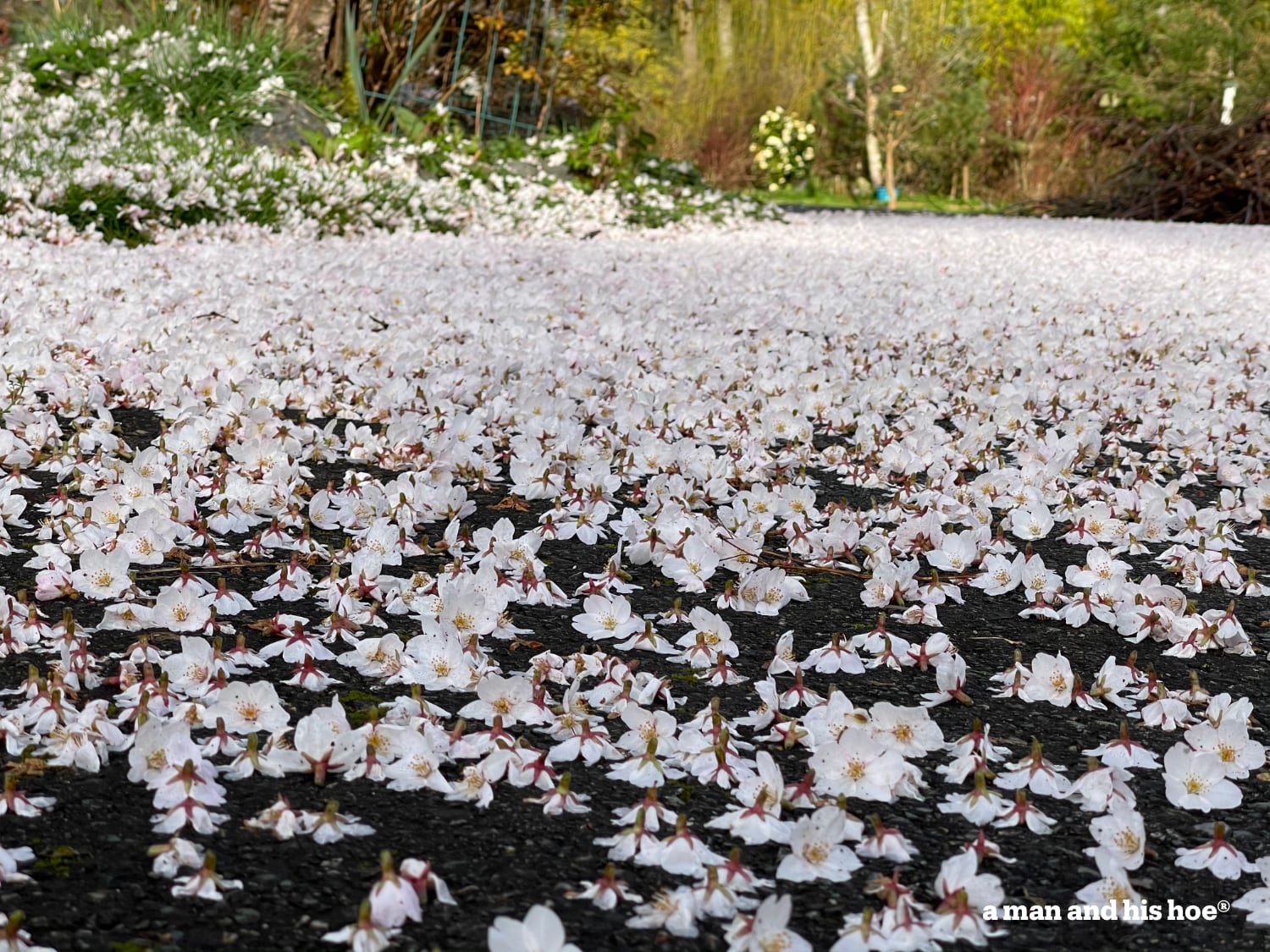 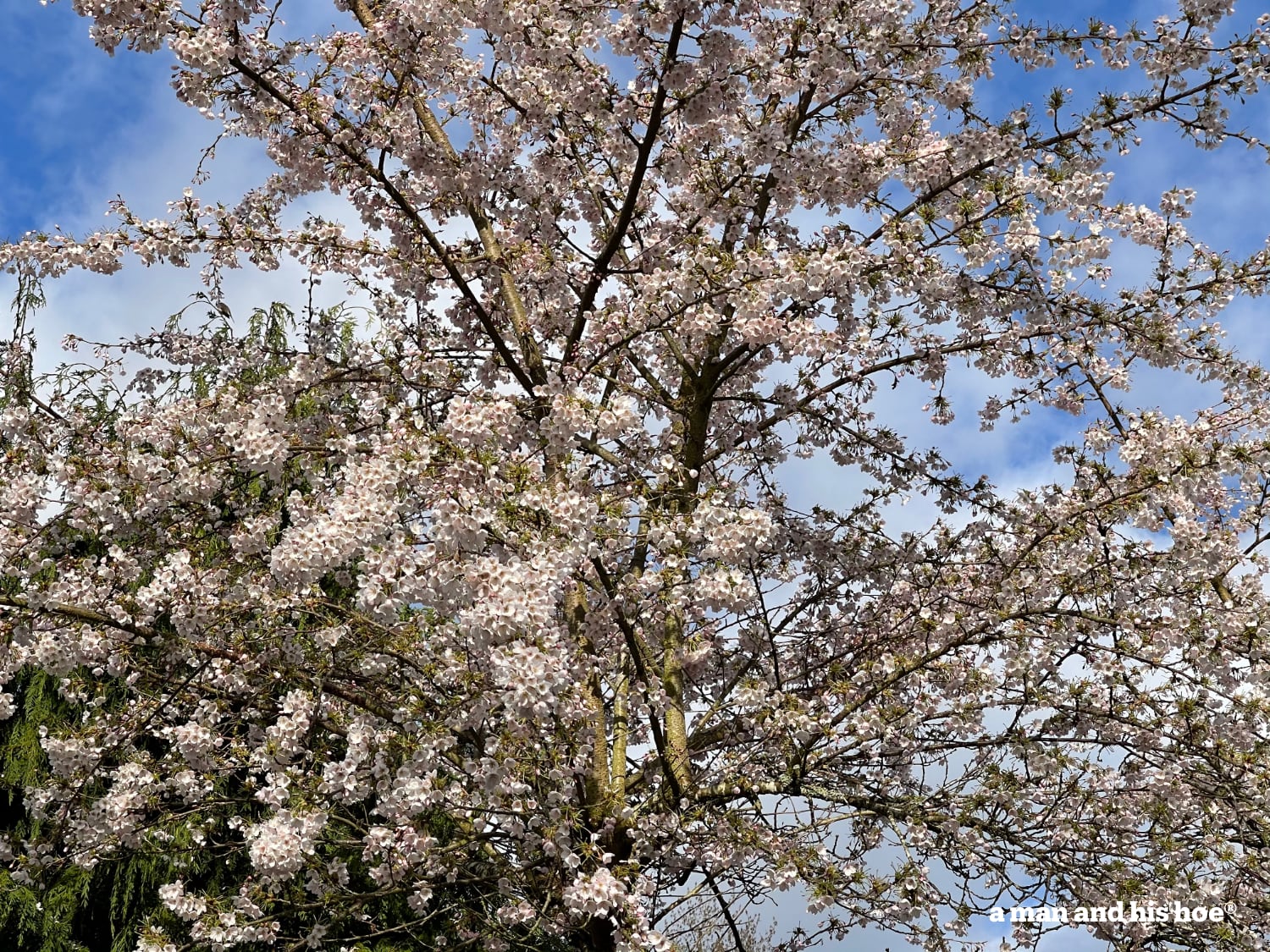 With today’s sunshine and tomorrow’s forecast for a sunny day, the tree should be at its peak tomorrow. 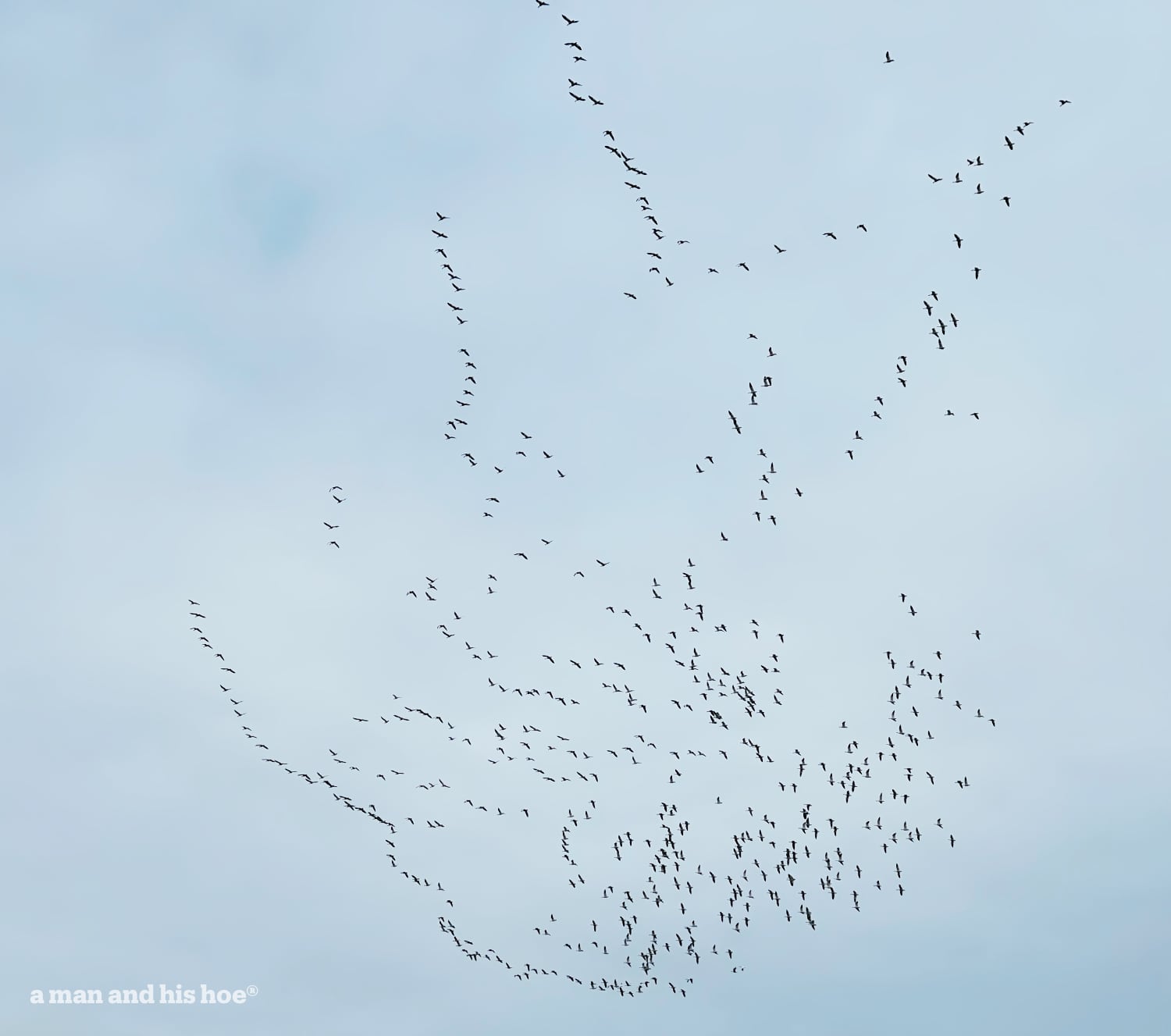 A series of trivial events put me on Bow Hill Road at the spot at 4:12 p.m. this afternoon where a large flock of Snow Geese crossed overhead on their way north. First, I forgot to take some mail with me when I made deliveries this morning. So I had to bicycle down to the post office in the afternoon.

I would have passed by the spot earlier and missed the Snow Geese, but the tires on my bicycle were low, so I had to pump air into them. 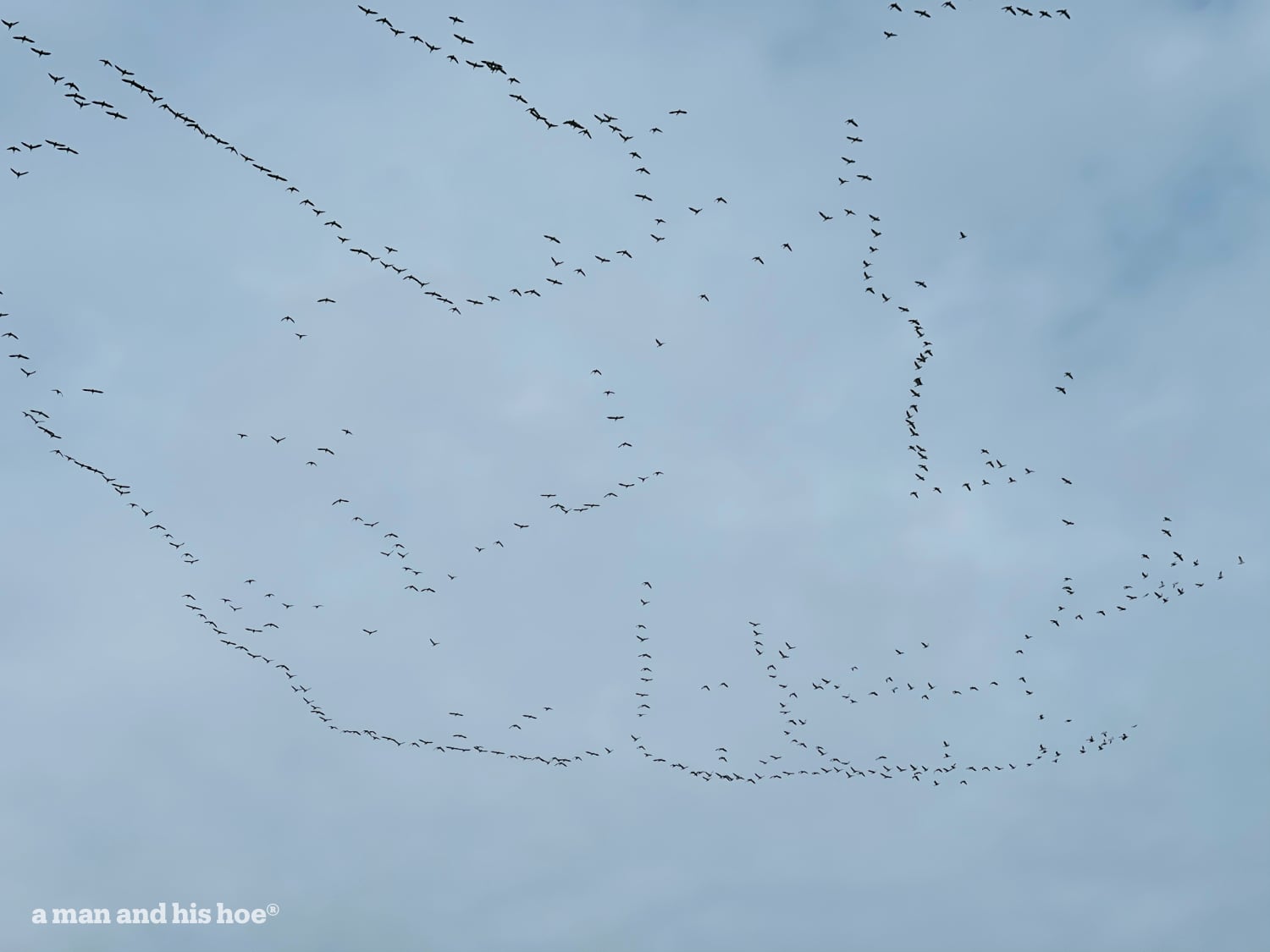 A few other forgettable events delayed me a minute here, a minute there. But not so much that I didn’t have the time to stop when I heard the Snow Geese approaching. The Bow Post Office closes at 4:30 p.m. However, I was within minutes of the post office, so I had the time to stop and enjoy the sight of the Snow Geese leaving. Was this their final flight out of the Skagit Valley? I don’t know. But in the direction they were flying, there’s no flat land to land until the other side of the Chuckanuts.

The peculiar thing about Snow Geese is the meandering threads they form in the sky when they fly. They don’t make the perfect V formations of Canada Geese. They fly in such numbers that their meandering lines can stretch for miles.

And I would have missed the spectacle if I had remembered to take the mail with me this morning.