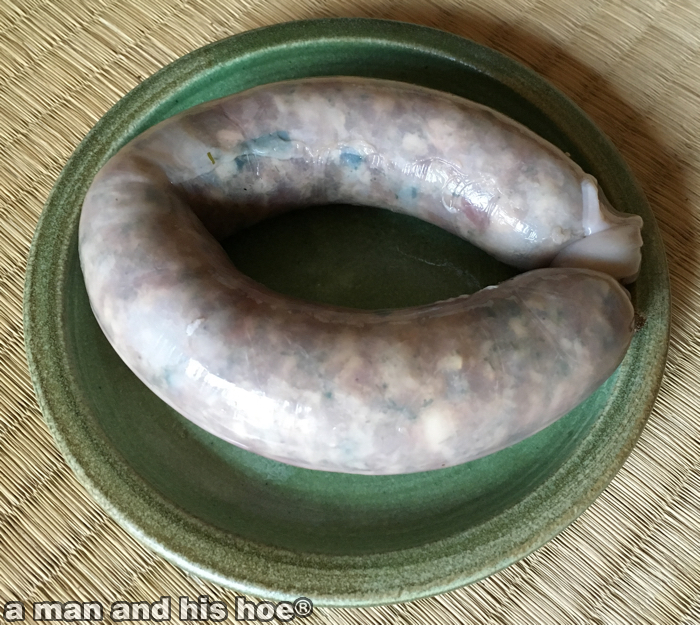 If you can wipe a baby’s butt, you can make sausage from scratch. This summer we purchased half of a pig from Akyla Farms. They raised ten pigs on pasture on the banks of the Skagit River in Birdsview. They slaughtered the pigs on October 30. After slaughtering, the carcasses were going into town to be cut and wrapped, but I had to go out to the pasture where they were slaughtering the pigs, to pick up the small intestines. I’d requested them as I wanted to try making sausages.

I brought the small intestines home, hooked one end to a hose in the yard and cleaned them out for an initial cleansing. Then I took them inside to thoroughly clean them by hooking one end to the faucet and running water through them until the water ran clear. You know, if you’ve wiped a baby’s butt, you can do this. There is food matter being digested inside the small intestines, but it isn’t until this matter enters the large intestine that the liquids are absorbed and feces formed. What is in the small intestines is more like green baby spit. Ever have a baby throw up on your shoulder? If that didn’t kill you, this won’t either.

Running water through the small intestines made me realize how amazing they are. The membrane is so thin and yet strong. Pigs and humans have very similar internal organs, and looking at and feeling the small intestines made me realize how dependent we are on these living translucent tubes. All our food goes through them and we get many of our nutrients through these tubes of paper thin membranes. A human’s small intestines are about seven meters long, or around twenty three feet. Think of a garden hose that long and how flexible it would need to be to fit inside your belly. One little puncture wound and it is all over. I’ll never look at knitting needles again. They are sharp and long enough to cause a lot of damage. Maybe knitters should wear puncture proof vests just in case they fall over on their knitting needles. If you are around knitters, maybe you need to be extra cautious.

We picked up our cut and wrapped half a pig on Saturday, and yesterday, we mixed ground pork, ground pork belly, cooked brown rice, a bowl of crushed garlic, a handful of dill weed, allspice, cumin, coriander, pepper, and salt in a big bowl, and then stuffed the mixture into the clean small intestines. We made about ten feet of sausage. Some we formed into rings. Some we formed into links. We had no idea what it would taste like. We were not prepared. My expectations were somewhat along the lines of the sausage from the store. The flavor of these homemade sausages blew our minds away. We kept saying, “Wow!” over and over again. We had no idea sausage could taste this good.

Making our own sausage from scratch was one of those life changing moments, like the first time I pulled a carrot out of the ground and ate it, the first time I plucked an apple off the tree, or the first time I butchered a chicken and discovered that it was nothing like what is sold in the supermarkets. I’ve cleaned baby bottoms that were a lot worse than the small intestines of that pig. So if you find the idea of making sausages from scratch daunting, remember, if you can wipe a baby’s butt, you can do it.

One Reply to “If You Can Wipe a Baby’s Butt”