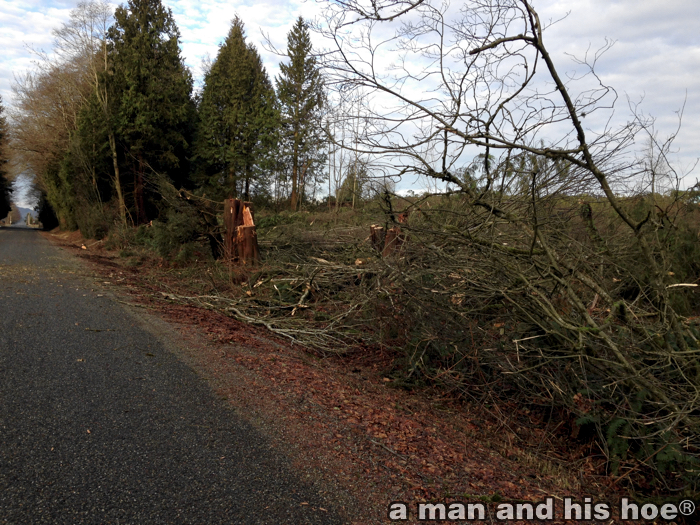 I knew they were logging this forest on my way to the post office, but today the shock of seeing nearly the entire forest gone made me stop and … well what do you do when you come face to face with such devastation?

A few summers ago, I was bicycling by this forest when a large male lynx crossed the road in front of me. He was walking at a leisurely pace, and when he saw me, he didn’t dash off. He just kept walking across the road as if he’d seen me many times before. He walked up a bank to the edge of the woods, and turned around to look at me.

I’d never seen a lynx in the neighborhood, and had to stop and look at it. It calmly stared back at me. Maybe he was sizing me up, wondering if he could make a meal out of me. Perhaps he was calculating how many freezer bags of meat my carcass would fill. After looking at me for a while, it turned and disappeared into this very forest. I guess I didn’t look good enough to eat. 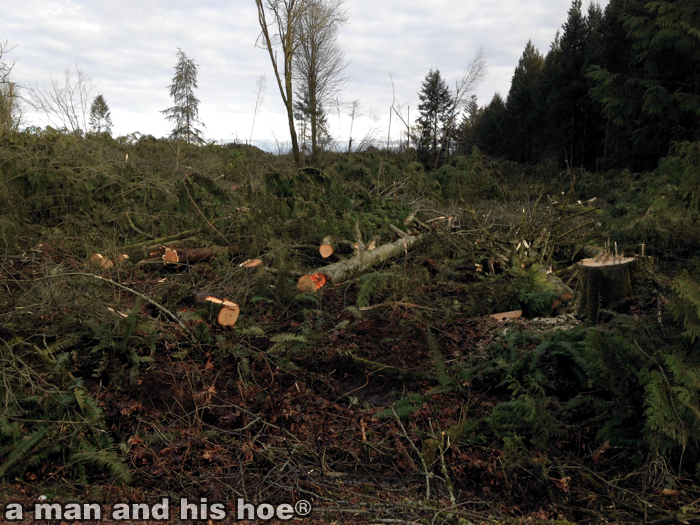 The area that was logged is a 40 acre parcel. It’s puzzling how this works. We’ve got this odd legal system where forests and all the creatures that live in it have no rights. A human who owns the land can come in at any moment and cut everything down. What happens to all the birds who slept in all those trees? What happens to all the animals who had homes there? Where do they go? What about the value of the oxygen the trees produced and the carbon dioxide they were extracting out of the air and storing, the rain water they were capturing and slowly releasing? People are allowed to cut down a forest and not take any of that into account?

Our sense of ownership and responsibility is so short-sighted. Molecular evidence suggests that the last common ancestor between humans and chimpanzees (Pan) diverged 4–8 million years ago. Which means we can trace our ancestors back some 200,000 to 400,000 generations. Given that there were so many generations before us, there are likely to be hundreds of thousands or millions of generations of humans to come. Yet, what are we leaving future generations, if we keep treating our planet the way we do? Don’t we owe it to them to make sure our planet stays the wonderful blue and green gem that it is?

There are various estimates as to when the sun will expand and swallow the earth, or burn up all its hydrogen and turn cold, but it seems that we have four to seven billion years to go before that happens. Even a billion years is some 50,000,000 generations of humans yet to come. What sort of planet are we leaving for them? All those generations of humans yet to come, and the rest of life on this planet, well, you add them all up and they surely have a more substantial claim on this planet than just a single generation of humans does. And yet, when you go to clear a forest of forty acres, none of that counts. It seems so bizarre.

One Reply to “Where a Lynx Used to Roam”