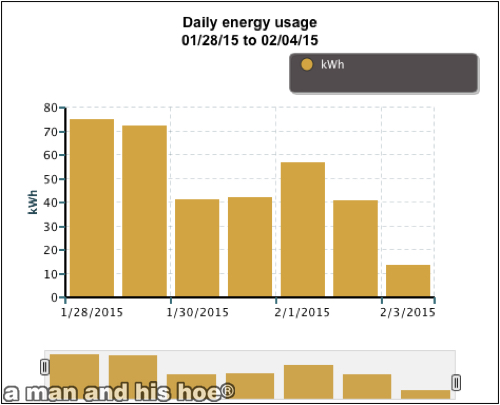 Seeing is believing. I often read skeptics claim that putting in solar voltaic systems in the Pacific Northwest, especially the cloudy, dreary Puget Sound area is pointless. On Friday, January 30, the company installing our system switched it on. On Tuesday, February 3, our utility installed their new meter. We had sunny weather on Saturday, but the rest of the days have been cloudy with intermittent drizzle and rain. And yet our electric usage has plummeted to less than a fifth of what it was, and this is the cloudiest time of the year. Wait until the sun is shining sixteen hours a day this summer.

Wow! Sometimes you can’t help but get excited. If we all did this, we could close all the coal power plants and shut down the coal mines in a few months. Millions could start breathing clean air again. According to the American Lung Association, “Particle pollution from power plants has been recently estimated to kill approximately 13,000 people a year. Most coal-fired plants are concentrated in the Midwest and Southeast.”

The owners and operators aren’t going to close these power plants and coal mines on their own, but a drastic reduction in electric consumption by everyone generating much of their own electricity will close them faster than anything. We can do this. Not only will we all breathe cleaner air and see bluer skies, so will all the chickens.